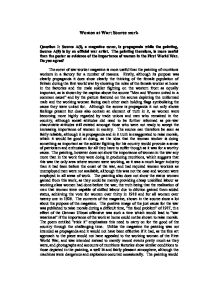 Women at War: Source work Question 1: Source A(i), a magazine cover, is propaganda while the painting, Source A(ii) is by an official war artist. The painting therefore, is more useful than the poster as evidence of the importance of women in the First World War. Do you agree? The cover of war worker magazine is more useful than the painting of munitions workers in a factory for a number of reasons. Firstly, although its purpose was clearly propaganda it does show clearly the thinking of the female population of Britain during the first world war by showing the roles of the female worker at home in the factories and the male soldier fighting on the western front as equally important, as is shown by the caption above the source "Men and Women united in a common cause" and by the picture featured on the source depicting the uniformed male and the working woman facing each other each holding flags symbolising the cause they were united for. Although the source is propaganda it not only shows feelings present but does also contain an element of truth in it, as women were becoming more highly regarded by trade unions and men who remained in the country, although social attitudes did need to be further reformed as pre-war chauvinistic attitudes still existed amongst those who were not ready to accept the increasing importance of women in society. The source can therefore be seen as fairly reliable, although it is propaganda and in it truth is exaggerated to raise morale, which it would be good at doing, as the idea that the woman worker is doing something as important as the soldier fighting for his country would provoke a sense of patriotism and enthusiasm for all they have to suffer though as it was for a worthy cause. The painting, however does not show the importance of women in the war any more than in the work they were doing in producing munitions, which suggests that ...read more.

Source D(ii) is an extract from the war memoirs of David Lloyd-George, the British Prime minister during the First World War. Lloyd George had received a lot of trouble from the suffragette movement before the war for not being supportive enough of giving women the vote and other freedoms and the purpose of this source is to show that his ideas had changed and that he was very supportive of women and regarded them highly due to their support of the war effort. The source praises the courage shown by the women working in dangerous conditions in factories, but only gives one piece of evidence to show this to be true, and although that piece may be true, in other cases women were not so courageous as to carry on working after a fatal accident in a factory. The source is also only the view of one person, Lloyd-George himself, and therefore cannot reflect the attitudes of men across the country towards women. The two interpretations of the attitudes felt towards women during the war differ because of the purposes that they were written for, Source D(i) was written long after as information on the events, it is unbiased however is not completely accurate. Source D(ii) was written to fend off criticism of the former prime minister for his pre-war views of women. Women at War: Source work Question 4: Sources F(i) and F(ii) give different impressions of what war work meant to women, which view is more likely to be correct? Source F(ii) is a more correct view of what war work meant to women, as it recognises both the problems and the benefits that women found from war work, whereas Source F(i) which is a photo aimed at persuading unemployed women to find work shows the work as an enjoyable and easy way of supporting the war effort. Source F(i) shows a woman who has taken a job as a conductress on a bus, a job previously held mainly by men, she ...read more.

Source D(ii) praises women for the work which they did during the war, however it does not show the opportunities or advantages of this, the only advantages it suggests is that the respect gained by women for this work resulted in women getting the vote, partly in 1918 and finally in 1928. Source E suggests that women who were working did not enjoy their work and did not support the war effort, which resulted in strikes. This is not true, as the strikes which happened were due to bad pay rather than a lack of support for the war effort. The source does not show what opportunities women had, and any advantages of any opportunities, so it cannot say whether the statement is correct or not. Source F(i) suggests that women enjoyed work and the opportunity to work for the first time, suggesting that the statement is correct, although the source is not reliable as it is an example of propaganda. Source F(ii) says that women who worked did not gain anything from working, there were no advantages for them, as a job provided an extra burden for them on top of looking after children and getting hold of scarce supplies. The source is reliable and suggests that the statement is incorrect. Source G(i) says that women had ample amounts of money an were respected because they could do work in factories, the money they were receiving from work was clearly an advantage, so the source suggests that the statement is correct, whereas source G(ii) shows a very different view, that women were impoverished and desperate due to the departure of their husbands, although this is an extreme example and its view that the statement is incorrect cannot be reliable because of this. In general the sources prove that the statement, "The war brought great opportunities and advantages to women." Is correct to a certain extent, and the sources which suggest that this is not true are unreliable because they are extreme examples which do not represent the country as a whole, or because they are unreliable. ...read more.