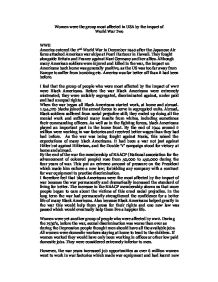 Women were the group most affected in USA by the impact of World War Two WWII America entered the 2nd World War in December 1940 after the Japanese Air force attacked American war ships at Pearl Harbour in Hawaii. They fought alongside Britain and France against Nazi Germany and her allies. Although many American soldiers were injured and killed in the war, the impact on Americans back home was generally positive, as the US was too far away from Europe to suffer from bombing etc. America was far better off than it had been before. I feel that the group of people who were most affected by the impact of ww2 were Black Americans. Before the war Black Americans were extremely mistreated; they were unfairly segregated, discriminated against, under paid and had unequal rights. When the war began all Black Americans started work, at home and abroad. 1.154,720 blacks joined the armed forces to serve in segregated units. Abroad, Black soldiers suffered from racial prejudice still; they ended up doing all the menial work and suffered many insults from whites, including sometimes their commanding officers. ...read more.

All women were domestic workers staying at home to tend to the children. If women worked they would have only been working in offices or other low paid domestic jobs. They were considered extremely inferior to men. However, the war years increased job opportunities as over 6 million women went to work in war factories which made war equipment and had learnt new skills that had previously only been used by men. Working in the factories brought women higher wages than they had previously been used to. The short term gains for women during the war were; more money, more independence and more freedom, and in the long term they gained a greater confidence in themselves. However after the war men wanted women to go back to the home and give up the 'manly' jobs. The government actively encouraged women to leave their jobs too and most women accepted this and returned home to their domestic chores. Those who did work would have only been working 'woman's jobs' like being a secretary, this would have been the ideal woman. ...read more.

The Economy was affected greatly by the war. Before the war America was in the longest and most severe Depression ever seen. There were banks collapsing, high unemployment, poverty, and many businesses which had failed. Farmers were also suffering hardship as they were hit by a disastrous drought that lasted for the entire 1930's. During the war many factories opened to make war equipment like weapons etc. Many more jobs were available so the unemployed numbers decreased, and people earnt more money which would have increased their standard of living. After the war America was out of the depression without the threat of dictatorship which affected the many people in America. The USA now had a strong economy. Only in the United States were people better off than before the war. American banks became the world's bankers. Only the USA could help the war-shattered economies of other countries. The war economy, coupled with good weather in the years 1941-45, boosted agriculture. Therefore I think the economy was greatly affected by ww2, because America managed to come out the depression and improve the lives of many American people. ...read more.