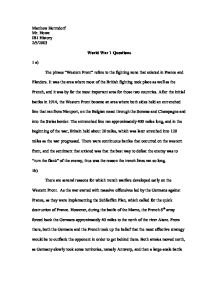 Matthew Herrndorf Mr. Howe IB1 History 2/5/2003 World War 1 Questions 1 a) The phrase "Western Front" refers to the fighting zone that existed in France and Flanders. It was the area where most of the British fighting took place as well as the French, and it was by far the most important area for those two countries. After the initial battles in 1914, the Western Front became an area where both sides held an entrenched line that ran from Nieuport, on the Belgian coast through the Somme and Champagne and into the Swiss border. The entrenched line ran approximately 400 miles long, and in the beginning of the war, Britain held about 20 miles, which was later stretched into 120 miles as the war progressed. There were continuous battles that occurred on the western front, and the sentiment that existed was that the best way to defeat the enemy was to "turn the flank" of the enemy, thus was the reason the trench lines ran so long. 1b) There are several reasons for which trench warfare developed early on the Western Front. As the war started with massive offensives led by the Germans against France, as they were implementing the Schlieffen Plan, which called for the quick destruction of France. However, during the battle of the Marne, the French 6th army forced back the Germans approximately 40 miles to the north of the river Aisne. From there, both the Germans and the French took up the belief that the most effective strategy would be to outflank the opponent in order to get behind them. Both armies moved north, as Germany slowly took some territories, namely Antwerp, and then a large-scale battle raged at Messines and Ypres, however after several weeks that had both sides experience tremendous casualties, the realization came that the Western Front would not be won in one large offensive, and instead the armies focused their attentions on building very strong defensive structures, namely a system of interconnected trenches, from which opponents could be seen and fired upon, but no attack could be launched. ...read more.

Furthermore, near the end of the war, Austria-Hungary was rendered a practically non-beneficial ally, as they experienced serious problems with the defections of various nationalities, namely the Czechs and the Yugoslavians whom had declared their independence from the monarch. And although the Russians experienced serious internal turmoil that led to their surrender, the Entente made up for the loss when the U.S. joined them. By the year 1918, the Germans were understandably depleted, and had few options to pursue. Their only option was to launch a massive offensive in order to end the war as soon as possible. Though the offensive was extremely successful, the defenses that had been built up for the four years of the war proved to be too strong too penetrate. The Germans were forced to retreat, and when the Entente counter attacked, the Germans put up very little resistance as huge numbers were captured in 1918. Finally, the Germans had entered the war with huge hope resting on the shoulders of the Schlieffen Plan. It was expected that the plan would have tremendous success, and the Germans were confident they could defeat the Russians so long as it was a single front war. However, because the plan was thrown of course, and eventually derailed near Paris, the Germans were faced with the problem of having to fight a war on two fronts. Though they proved to be very capable and successful, the two fronts took its toll on the Germans as they were forced into a stalemate for four years. Had the Germans successfully orchestrated the Schlieffen plan, there is a good chance the Central Powers would have emerged successful in the war, however, when the plan was halted, Germany became engaged in a war where there were too many different factors working against them. 3. The reason for which the generally assumed durations of the wars were proved incorrect is primarily due to the fact people had no real reference point for which to compare lengths, and thus guessed wildly. ...read more.

From the beginning it was clear they would have a much better chance fighting on the Eastern Front then the Western Front. By 1917, the Germans had done so much damage to the Russian army, with at least 3 million deaths, that the Russians could no longer go on. Civil unrest became too much, and the October Revolution began in Russia, in which the government was overthrown. The Russians then proceeded to surrender to the Germans, giving up huge territory as well as huge numbers of people in the treaty of Brest-Litovsk. The Germans fortunes were so successful on the Eastern Front because Russia could no longer continue with the war effort. The Western Front proved to be too much for the Germans. In 1918, they were forced to attack in an attempt to win over the Western Front before another large reinforcement Americans arrived. However, after several significant gains, they were stopped by the French and the Americans at the Marne. It had been their last large push, as they were forced to retreat to the Hindenburg Line. Soon after the Entente launched an extremely successful counter attack that lead to control of the Western Front, as the Germans were so badly weakened. Germany had very little option but to launch their offensive, as they believed they would stand no chance with basically no allies, with the exception of Turkey and Bulgaria, though those two powers were ineffective. The Western Front was simply too much for the Germans to overcome. The fortunes of the Germans on the Eastern and Western Fronts were different for a multitude of reasons; however the opponents that lay on each front played a large role. The Russians proved to be incapable of sustaining their war effort, and internal problems combined with Germany forced them to surrender by 1917. The Western Front was to well defended for Germany's final push, and the Entente took control. Germany simply had too much to overcome in their attempt to win on the Western Front. ...read more.