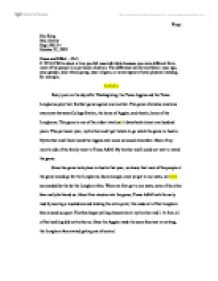 Write about a time you felt uncomfortable because you were different from most of the people in a particular situation.

Eric King Mrs. Overly Engl.1301.14 October 21, 2003 Cause and Effect - Ch.5 P. 225 #1 Write about a time you felt uncomfortable because you were different from most of the people in a particular situation. The difference can be any factor: your age, your gender, your ethnic group, your religion, or some aspect of your physical makeup, for example. XxXxXx Every year on the day after Thanksgiving, the Texas Aggies and the Texas Longhorns play their football game against one another. The game alternates locations every year between College Station, the home of Aggies, and Austin, home of the Longhorns. This game is one of the oldest rivalries; it dates back almost one hundred years. ...read more.

Sure enough, once we got to our seats, we were surrounded by the by the Longhorn fans. When we first got to our seats, none of the other fans really bothered us. About five minutes into the game, Texas A&M took the early lead by scoring a touchdown and kicking the extra point; this made all of the Longhorn fans around us upset. The fans began yelling obscenities at my brother and I. At first, all of the heckling did not bother us. Once the Aggies made the score fourteen to nothing, the Longhorn fans started getting out of control. The fans began just yelling and screaming at us. ...read more.

At halftime, the score of the game was twenty-one to fourteen, with the Longhorns leading. Now that the Aggies had lost the lead, all of the people around us did not treat us so poorly. The Longhorns got the ball on the opening kick off of the half; they ran it all the way back to the fifty-yard line. This got all of their fans excited. A few plays later they scored another touchdown, increasing their lead to fourteen points. By the start of the fourth quarter, the Longhorns had a twenty-four-point lead over the Aggies. Now the Longhorn fans began to yell at us for a different reason. They began to heckle us because they were beating us so bad. As the Longhorns ran up the score, the fans became worse and worse. King 1 ...read more.