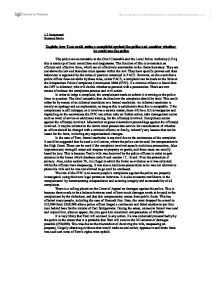 1.2 Assignment Roxanne Slevin Explain how Tom could make a complaint against the police and consider whether he could sue the police The police are accountable to the Chief Constable and the Local Police Authority (LPA); this is made up of local councillors and magistrates. The function of this is to maintain an efficient and effective force, which are all effectively answerable to the Home Secretary. They are not above the law and therefore must operate within the law. They have specific powers and their behaviour is regulated by the codes of practice contained in PACE. However, on the event that a police officer does not abide by these rules, under PACE, a complaint can be made to the force to the Independent Police Complaints Commission 2004 (IPPC). ...read more.

involved. Disciplinary action against the officer(s) involved. Misconduct or gross misconduct proceedings against the officer(s) involved. It may be referred to the crown court prosecution service for consideration of whether an officer should be charged with a criminal offence or finally, indentify any lessons that can be learnt for the force, including any organisational changes. In the case of Tom, formal resolution is required due to the seriousness of the complaint. It could be suggested that he used a civil action, where the police can be sued for compensation in the High Court. These can be used if the complaint involved assault; malicious prosecution, false imprisonment; wrongful arrest and trespass to property or goods, and these cases are usually heard by jury. ...read more.

This has affected many people, including the case of Kenneth Hsu. Here, the court dropped his award to �35,000 from �220,000 after a police officer forged a confession and faked another to put four men behind bars for the murder of Carl Bridgewater. During the arrest, excessive forced was used and injured him, after an appeal, the jury gave him maximum compensation of �50,000. It is very likely that Tom will succeed in any action. He was undeniably treated badly by the police to the extent that it is probable that Tom will receive the full amount of damages possible (�50,000). This was due to the misconduct of deceiving the wife, trespassing on property, illegally obtaining evidence that would make to trial unfair, oppressive and brute force was used and none of Tom's rights were upheld. ...read more.