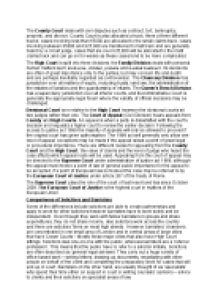 Report on hierachy of courts and legal personnel.

ï»¿The County Court deals with civil disputes such as contract, tort, bankruptcy, property, and divorce. County Court is also allocated a track, there a three different tracks; cases involving less than £5000 are allocated to the small claims track, cases involving between £5000 and £25,000 are transferred to fast track and are generally heard by a circuit judge, cases that are over £25,000 will be allocated to the multi claims track and can go on for weeks as these cases tend to be more complicated. The High Court is split into three divisions, the Family Division deals with personal human matters such as divorce, children, probate and medical treatment. Its decisions are often of great importance only to the parties, but may concern life and death and are perhaps inevitably regarded as controversial. The Chancery Division has jurisdiction over all matters of equity, including trusts, land law, the administration of the estates of lunatics and the guardianship of infants. The Queen's Bench Division has a supervisory jurisdiction over all inferior courts, and its Administrative Court is generally the appropriate legal forum where the validity of official decisions may be challenged. ...read more.

a point of European law is involved the case may be referred to by the European Court of Justice under article 267 of the treaty of Rome. The Supreme Court plays the role of the court of last resort and has since October 2009. The European Court of Justice is the highest court in matters of the European Union. Comparisons of Solicitors and Barristers Some of the differences include solicitors are able to create partnerships and apply to work for other solicitors however barristers have to work solely and be independent. Even though they work with fellow barristers in groups and share expenditures, they do not share income, also solicitors work across the country and there are solicitors? firms on most high streets. However barristers? chambers are concentrated in one small area of London and in central areas of large cities that have Crown Courts ? Mostly those major cities that also have High Court sittings. Solicitors deal one-on-one with the public, whereas barristers are a ?referral profession?. ...read more.

However by extending the list of potential judges in 1990 by allowing solicitors to become High Court judges then another act in 2007 that stated it was a needed requirement that new judges have to posses the relevant legal requirements for the first time this does not mean necessarily being a barrister or solicitor. Fellows from the Institute of Legal Executives and registered patent attorneys and trademark attorneys may apply for judicial roles such as deputy district judge or tribunal judge, the act also made leniencies to how prospective applicants have gained experience in law, as well as practising teaching law such activities as mediating or arbitrating, drawing up legal documents or giving advice on law are now also allowed when the judiciary are searching through applicants. Lay People There are about 29,000 magistrates sitting as judges in the magistrates courts; they sit to hear cases on a bench of two or three people. A sole magistrate has very limited powers however they can issue arrest warrants and conduct hearings. District judges also work in Magistrates courts. To become a lay magistrate ...read more.