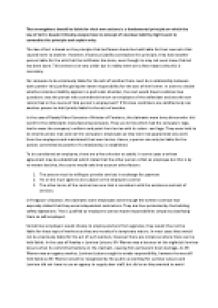 That wrongdoers should be liable for their own actions is a fundamental principle on which the law of tort is based. Critically analyze how to concept of vicarious liability might seem to contradict this principle and explain why.

﻿That wrongdoers should be liable for their own actions is a fundamental principle on which the law of tort is based. Critically analyze how to concept of vicarious liability might seem to contradict this principle and explain why. The law of tort is based on the principle that tortfeasor should be held liable for their own acts that caused harm to another. However, Vicarious Liability contradicts this principle, they hold another person liable for the acts that the tortfeasor has done, even though he may not even know that act has been done. This seems to be very unfair but in reality there are a few reasons why this is necessary. For someone to be vicariously liable for the acts of another there must be a relationship between both parties- this justifies giving the latter responsibility for the acts of the former. In order to decide whether vicarious liability applies in a particular situation, the cout would have to address two questions: was the person who committed the tort an employee of the defendant and was the tort committed in the course of that person?s employment? If this two conditions are satisfied only can another person be held jointly liable for the acts of another. In the case of Ready Mixer Concrete v Minister of Pensions, the claimants were lorry drivers who did work for the defendants manufacturing company. ...read more.

In Bayler v Manchester Railway Co, the railway porter pulled the claimant off the train by force, thinking that he was on the wrong train. The porter was merely trying to do what he was authorized to do, even though he was doing it so badly as to have completely the opposite effect. An employer may attempt to expressly prohibit an act to limit the responsibility that they would have over the employees. However this is only limited to the scope of the job itself and not to how the job is done. In Limpus v London general Omnibus Co a bus driver had been given written instructions not to race with the other buses. He disobeyed this order and caused a collision with the claimant?s bus which damaged it. He was doing an act which he was authorized to do. Driving the bus in such a way to promote the defendant?s business. He was within the course of his employment even though the way he was doing th job was quite improper and had been prohibited. Vicarious Liability should be imposed because sometimes the employers are the ones with the financial resources. They have ?deeper pockets? and are more likely to be insured. Many employers are large companies ?placing liability on them means losses can be passed onto consumers in the form of higher prices. ...read more.

liability on employers encourages them to take care to prevent work practices that could result in accidents there could be a temptation for employers to turn a blind eye especially if the practices have a benefit to themselves, if they knew liability would be restricted to the employee. The employers will not be liable if the employees have committed a tort that is considered a ?frolic of their own? Hence this can be seen that it is not a complete liability that the employers have. An employer will not be responsible for acts done by employees which have nothing to do with their employment. The employee?s job may provide them the opportunity to commit the wrongful act. They may do so during work time, or using the employers equipment, but without a connection there can be no vicarious liability. In heasman Clarity Cleaning Co the employee of a cleaning contractoir was employed to clean telephones, and while doing so used the phones to make long distance calls from client?s premise. Theywere not vicariously liable, the unauthorized use of the phone was not connected with cleaning it and could not be regarded as cleaning it in an unauthorized manner. ________________ That wrongdoers should be liable for their own actions is a fundamental principle on which the law of tort is based. Critically analyze how to concept of vicarious liability might seem to contradict this principle and explain why. ...read more.