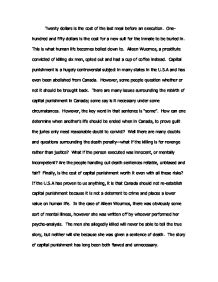 The Death Penalty in Canada. There are many issues surrounding the rebirth of capital punishment in Canada; some say is it necessary under some circumstances. However, the key word in that sentence is some.

Twenty dollars is the cost of the last meal before an execution. One-hundred and fifty dollars is the cost for a new suit for the inmate to be buried in. This is what human life becomes boiled down to. Aileen Wuornos, a prostitute convicted of killing six men, opted out and had a cup of coffee instead. Capital punishment is a hugely controversial subject in many states in the U.S.A and has even been abolished from Canada. However, some people question whether or not it should be brought back. There are many issues surrounding the rebirth of capital punishment in Canada; some say is it necessary under some circumstances. However, the key word in that sentence is "some". How can one determine when another's life should be ended when in Canada, to prove guilt the juries only need reasonable doubt to convict? Well there are many doubts and questions surrounding the death penalty-what if the killing is for revenge rather than justice? What if the person executed was innocent, or mentally incompetent? Are the people handing out death sentences reliable, unbiased and fair? Finally, is the cost of capital punishment worth it even with all these risks? If the U.S.A has proven to us anything, it is that Canada should not re-establish capital punishment because it is not a deterrent to crime and places a lower value on human life. ...read more.

The chance of this happening also has the ability to effect the jury's decision. Some juries will not convict because they do not want to execute the innocent and therefore the amount of convictions will lowerxii. It is worrisome that capital punishment may be given out over circumstantial evidencexiii, especially when someone who has been given the death sentence may never have admitted to doing the crime. This means no closure for the family of victims. It also leads to more complex questions of how to later compensate for the family of the victim. The case is also less likely to be solved if a death penalty has been hastily given and has been closed for a while. This is not just to say that the family of the victim should be compensated for, but also the family of the accused who would have faced years of possible persecution and exile. The financial affairs of an accused person also play another unfair factor in determining their innocence. Many defendants may not have an adequate amount of money to provide themselves with a good lawyer and in this way have less of a chance in proving innocence. Sometimes a jury would feel it necessary to execute these persons as their case seems less legitimate. ...read more.