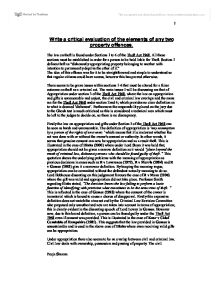 Write a critical evaluation of the elements of any two property offences. The law on theft is found under Sections 1 to 6 of the Theft Act 1968. All these sections must be established in order for a person to be held liable for Theft. Section 1 defines theft as "dishonestly appropriating property belonging to another with intention to permanently deprive the other of it." The idea of this offence was for it to be straightforward and simple to understand so that regular citizens could have access, however this has proved otherwise. There seems to be grave issues within sections 1-6 that must be altered for a fairer outcome on theft as a criminal act. The main issues I will be discussing are that of Appropriation under section 3 of the Theft Act 1968, where the law on appropriation and gifts is unreasonable and unjust, the civil and criminal law overlaps and the mens rea for the Theft Act 1968 under section 2and 6; which provides no clear definition as to what is deemed 'dishonest'. Furthermore the responsibility placed on the jury due to the Ghosh test is much criticised as this is considered a technical area which must be left to the judges to decide on, so there is no discrepancy. Firstly the law on appropriation and gifts under Section 3 of the Theft Act 1968 can be seen as harsh and unreasonable. ...read more.

Civil law deals with ownership, possession and passing of property. The civil framework is based on land law, gifts, succession and intellectual property issues. As a result of the wider interpretation of s3 appropriation, there is obvious tension between civil legal rules and the meaning of appropriation in criminal law. A civil law court will say that a gift is a valid gift of property. However this will not prevent a criminal court from stating that the defendant had still dishonestly appropriated property belonging to another and therefore, could be guilty of stealing it - (Hinks). This reflects the broad definition in Gomez which makes a conduct criminal even when it would not amount to a civil wrong. This relates back to the fact mentioned in the very beginning of this essay; the idea of this offence was for it to be simple and easy to understand so that ordinary people could have access; however it clearly fails in doing so. This creates a huge impact as for example, theft is a property offence and ownership of a property is a civil concept. However due to the wide-interpretation in Gomez, it seems that the defendant appropriated property even though the victim is giving it willingly - here obvious problems rise in consensual appropriation. It also suggests that the criminal law is dependent on civil concepts of ownership, possession and passing of property. ...read more.

In the case of Lloyd (1985) this proved a problem as the defendant was dishonest and satisfied the actus reus as he took the film reel to make copies. However he was not liable for section 6 as he temporarily deprived the owner of the property. As stated by Lord Lane CJ "a mere borrowing is never enough to constitute the necessary guilty mind unless the intention is to return the "thing" in such a changed state that it can truly be said that all its goodness or virtue has gone." Conditional intent proves to be the same as all the other elements of theft can be proven, however if there is nothing valuable to take then there is no theft as stated by the Court of Appeal in R v Easom (1971) that, "a conditional appropriation will not do'. In conclusion the law on theft has proven to be unsatisfactory. This is partly due to broad interpretations of Appropriation under s3 of the Theft Act 1968 where consent is irrelevant, and the definition of Dishonesty under s2 where it is unclear as to what can be judged as dishonest. This makes it hard for courts to use the law and leaves an element of improbability. Moreover it is evident that s6 is ambiguous and sometimes harsh as seen in the case of Lavender (1994). The law in its existing state has caused vagueness and at times injustice in which reform of the law is very much needed. ?? ?? ?? ?? 1 Pooja Sharma ...read more.