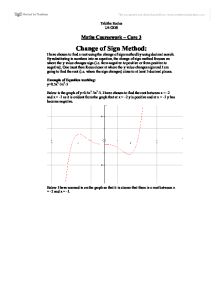 I have chosen to find a root using the change of sign method by using decimal search. By substituting in numbers into an equation, the change of sign method focuses on where the y value changes sign (i.e. from negative to positive or from positive to negative). One must then focus closer at where the y value changes sign and I am going to find the root (i.e. where the sign changes) close to at least 3 decimal places. 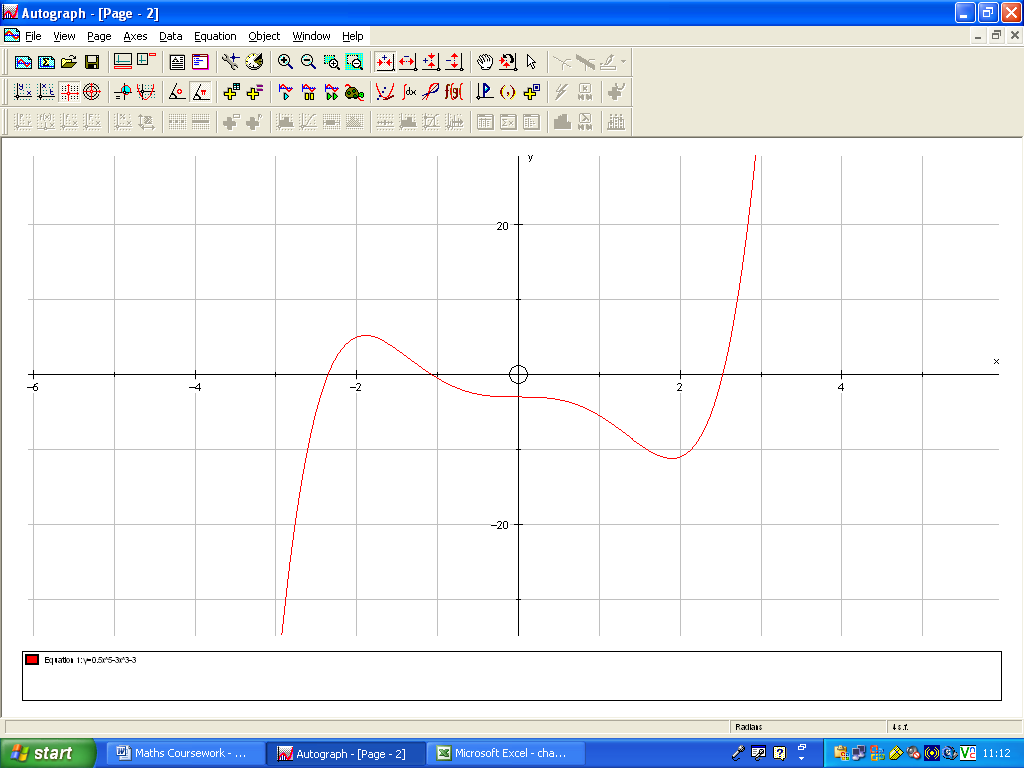 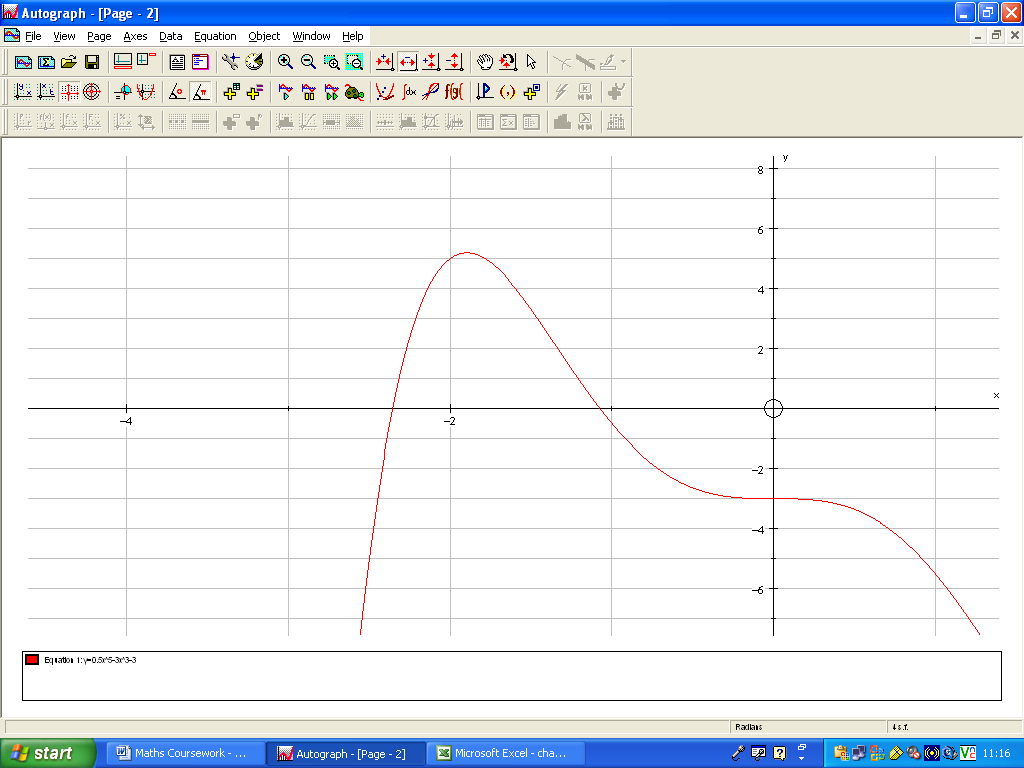 The last two values for x and y are the same therefore this is the solution to the equation for the root that I was looking for. The solution to 5 significant figures is x=0.25030.

The Newton-Raphson is another fixed-point interation. I will use the formula:

Therefore the iterative formula for my equation therefore is: 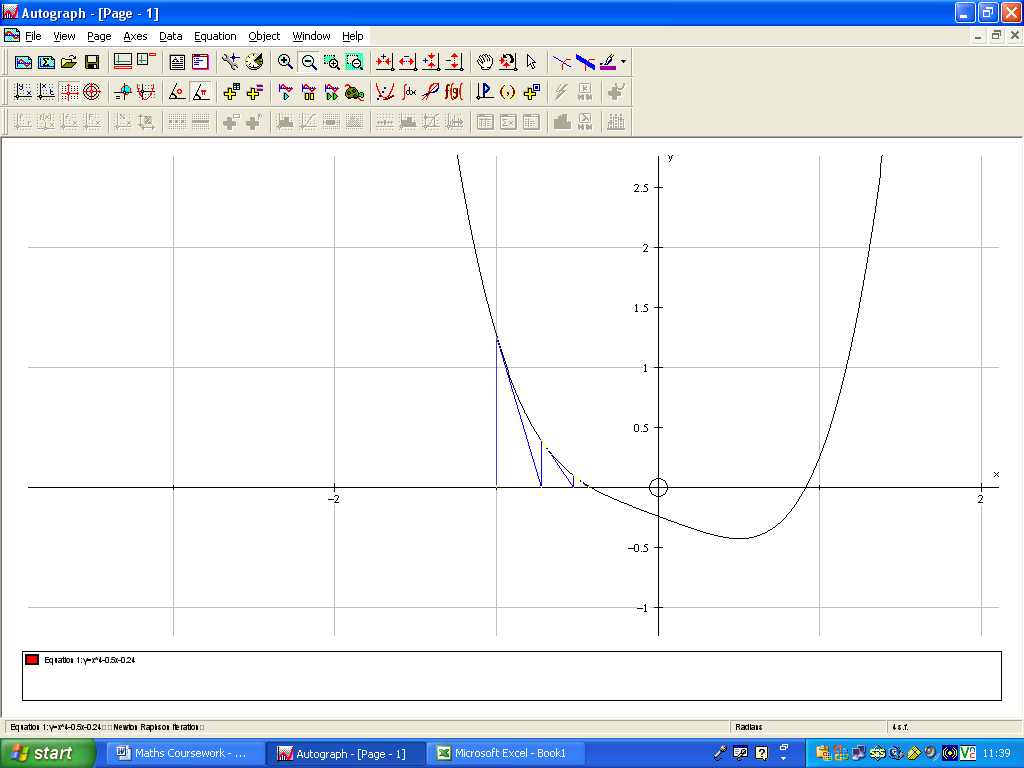 Above is the graph of the equation, showing the tangents to the graph and the roots of this equation. 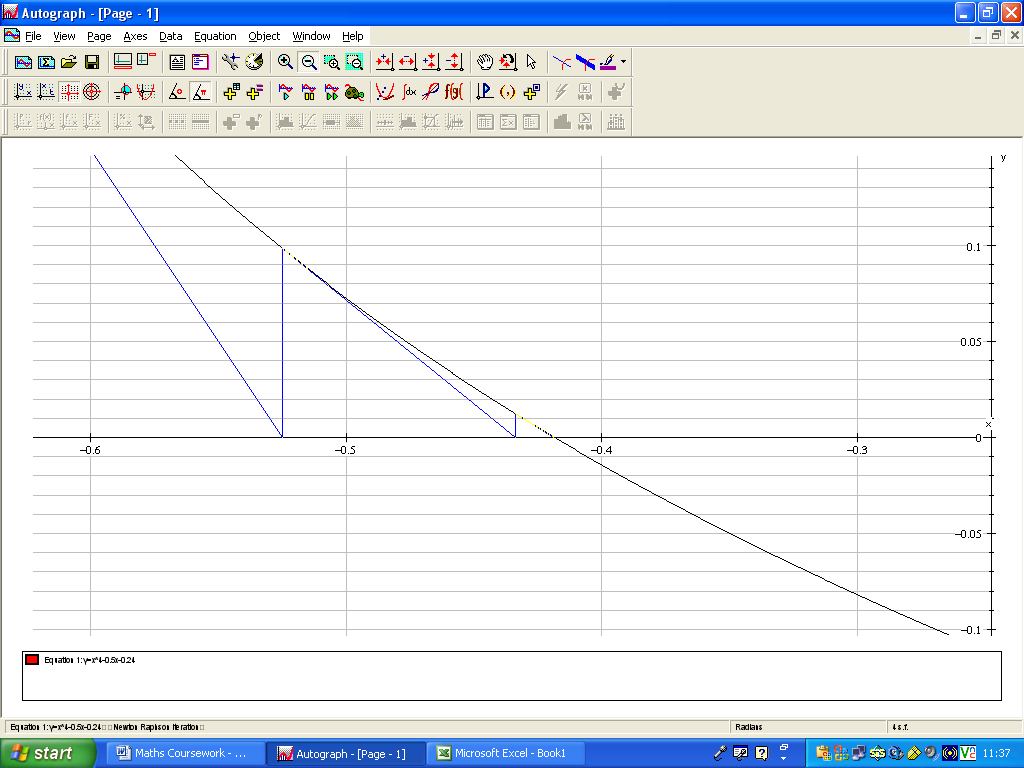 Above is a zoom in of the equation to show the tangents and roots getting closer and closer to where the curve crosses the x-axis.

I started with the estimated x-value of x=-1 as I can see that the curve crosses the x-axis between x= -1 and x= 0. The below is worked out in Autograph.

Below I substituted the value of x=-1 into the equation on Excel. I then worked out what the answer was which was -0.72.

The table below shows the x-value, y-value and the difference between the two up until the point the x value repeats.

If I substitute x values into the original formula which are either side of where the x-value repeats in the table (x= -0.41859) then we can see that the y value sign does change here. This shows that my root is between these two values

The rearrangement method is quite a difficult method to use as it requires you to rearrange the formula in such a way that the gradient where it crosses the y=x line is between -1 and 1. Quite often this does not happen and so it only works when you find the right rearrangement. This can therefore be quite time consuming. However, once the rearrangement is found the formula can be entered on Excel and all the calculations are done with only a few clicks. This is not so simply done with the Change of Sign Method. It is not, however, as time consuming as the change of sign method is.

The Newton-Raphson is easily the most efficient as it takes many fewer steps than the Change of Sign Method and many fewer iterative steps than the Rearrangement Method.  It is much less time consuming and the calculations can be easily done in Microsoft Excel.

The Change of Sign method is the most difficult method to use if you want a high degree of accuracy. It is the best one to use if you only want two or three decimal places of accuracy as it is simple and does not require complicated maths. The Rearrangement and Newton-Raphson Method are the better methods for high degrees of accuracy. Out of these the Newton-Raphson Method tends to reach the answer in the quickest way and involves no difficult rearranging.