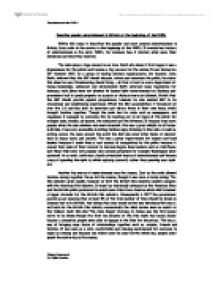 Describe popular entertainment in Britain at the beginning of the 1930s Within this essay it describes the popular and most common entertainment in Britain, from radio to the movies, in the beginning of the 1930's. It reveals key feature of entertainment in the early 1930's, for instance how it started, what were their intentions and what they involved. The radio plays a huge amount in our lives that's why when it first began it was a phenomenon for the public and became a big success for the nation. It was formed on 18th October 1922, by a group of leading wireless manufactures. Its founder, John Reith, believed that the BBC should educate, inform and entertain the public, he states this when he says 'Broadcasting should bring ... all that is best in every department of human knowledge, endeavour and achievement'. Reith enforced many regulations for instance; rude jokes were not allowed; he banned light entertainment on Sundays; and presenters had to speak properly so accents or dialects were not allowed. He felt that the BBC should provide popular programmes, however he also wanted BBC to be educational and enlightening experience. ...read more.

And during that year sound movies was introduced this was a set back for the British film industry economically the silent movies were no match to the 'talkies'. Such film like 'The Jazz Singer' starring Al Jolson was the first sound movie to be shown though the first ten minutes of the film really had sound. Sound became a sensation; people were able to engage in the films for low prices. This was a way of bringing many forms of relationships together such as, couples, friends and families. It was seen as a safe, comfortable and relaxing environment for everyone to enjoy an evening and because one ticket could be used for the whole day, people could spend the entire day in the cinema. Also Tennis became very popular, tennis clubs emerged increasingly and tennis courts were built in public parks by the local council. Though tennis was very popular it was quite expensive therefore it mainly attracted the middle and the upper class. Also because of its uniform it generally appeals to women, there dresses were shorter and movable as a result women could play much more comfortably. ...read more.

The halls mostly attracted the working class because of its cheap prices; it was a place to socialize; and the availability of alcohol was one of the music hall's attractions. People really came to music halls to unwind and have a lively time. Therefore, because the hall encouraged heavy drinking among both men and women, it didn't appeal to families seeing as it wasn't a place for children. Music halls went into a gradual decline after the introduction of talking films, Jazz, Swing, Big Band dance music and cinema. It's restriction on the range of audience, which limited their customers, was another reason of their failure. Musicals were similar to the music halls as they were both centered on music and performances; however because of the two different audiences it was incredibly different as well. Because of it sophistication musicals mainly attracted the middle and upper classes, the result of this meant that there was no competition. Therefore they carried on being successful. To conclude entertainment was a break through in allowing people to overcome to effects of the depression. Therefore it gave a rise to the upcoming of entertainment and how it affects our lives today. ?? ?? ?? ?? Entertainment in the 1930's History Coursework By Yejide Osoteku ...read more.