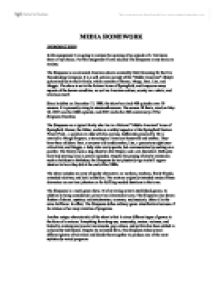 Evaluation of a TV serial

MEDIA HOMEWORK INTRODUCTION In this assignment I am going to analyse the opening of an episode of a Television show of my choice. For this assignment I have selected The Simpsons as my choice to analyse. The Simpsons is an animated American sitcom created by Matt Groening for the Fox Broadcasting Company. It is a soft-satirical parody of the "Middle American" lifestyle epitomized by its titular family, which consists of Homer, Marge, Bart, Lisa, and Maggie. The show is set in the fictional town of Springfield, and lampoons many aspects of the human condition, as well as American culture, society as a whole, and television itself. Since its debut on December 17, 1989, the show has aired 408 episodes over 19 seasons. It is presently airing its nineteenth season. The season 18 finale, aired on May 20, 2007 was the 400th episode, and 2007 marks the 20th anniversary of The Simpsons franchise. The Simpsons are a typical family who live in a fictional "Middle American" town of Springfield. ...read more.

In effect, The Simpsons defies ordinary genre classification because of its mixture of so many varieties of programs. Another unique characteristic of the show is that it mixes different types of genres in the form of a cartoon. Everything from drug use, censorship, racism, violence, and hatred to contemporary social movements, pop culture, and politics has been etched in celluloid by individuals. Despite its animated form, The Simpsons takes several different genres of television and blends them together to produce one of the most stylistically varied programs VISUAL AND AUDIO ELEMENTS The Simpsons' opening sequence is one of the show's most memorable hallmarks. All episodes open with the camera zooming through the show's title towards the town of Springfield. The camera then follows the members of the family on their way home. Upon entering their house, the Simpsons settle down on their couch to watch television. The opening was created by David Silverman, the first task he did when production began on the show. The series' distinctive theme song was composed by musician Danny Elfman in 1989, after Groening approached him requesting a retro style piece. ...read more.

Twentieth ended up emphasizing the adult appeal of The Simpsons to target 6 p.m. to 8 p.m. access periods. Competitors contended that because the cartoon is not a classic adult situation comedy, it should be targeted to children. Twentieth executives supported their decision and countered criticism by citing that The Simpsons regularly beat or tied The Cosby Show during its Thursday 8 p.m. airing years earlier. The decision to make adults the target audience was a difficult one to make because there was no precedent of an animated series airing in prime access, where stations can determine if it has the straight adult appeal of a live-action situation comedy. After being aired as a successful Christmas special in 1989, the show consistently scored high ratings in its prime-time slot on Sunday evenings. Since The Simpsons was a success from the outset, it cannot be said that the show suffered with cancellations or the like, as is common to many of the quality prime-time dramas. In fact, for a time, it was stacked up against the extremely successful The Cosby Show, and Twentieth Television executives noted it often beat out Cosby head-to-head in the ratings. ...read more.