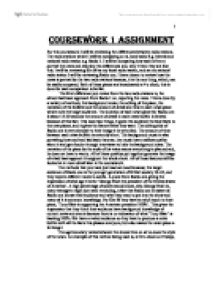 Coursework 1 assignment For this coursework I will be reviewing the differences between radio stations. The radio stations which I will be comparing on is, local radio E.g. Mercia and national radio station e.g. Radio 1. I will be comparing how each of them portrait the news and examine the differences and, why I think they are like this. I will be reviewing Kix 96 as my local radio station, and as my national radio station I will be reviewing Radio one. I have chosen to review how the news is portrait by the two radio stations because, it is the one thing, which, can be easily compared. Both of these pieces are broadcasted at 4 o clock, this is done for each comparison to be fair. The First difference you notice from the two radio stations is, the almost laid back approach from Radio 1 on, reporting the news. This is done by a variety of methods, the background music, the editing of the piece, the narration of the bulletin and the amount of detail and time in each news piece which suits the target audience. The duration of each news piece for Radio one is about 15-20 seconds the amount of detail in each news bulltin is limited because of this fact. ...read more.

The background music changes depending on, the time and the target audience. At 4 o clock the music is very mellow with a steady beat. At around 10 o clock the background music is at a higher tempo and is louder. This is a convention that audiences have come used to from Radio one. This is another example showing Radio one changing to suit the audience. The professional style from Radio one shows the amount of resources available and also, the editing side of broadcasting to the BBC is given good consideration on Radio one. On the BBC website they have a statement which says 'all aspects of the news either on television or radio have been done to the highest standard, foreground and background work, each plays a part in a show'. This is what a lot of people feel about the BBC. Many people when asked about the BBC have pre-conceptions of it to be trust worthy, well made, well established, for the people [because it is funded partly by the government] and high quality broadcasting standards. These qualities may not fall upon Kix because it is an independent news broadcaster; this gives the impression of a money-orientated business. ...read more.

The local news report last longer than the national news by 30 seconds. This shows that the audience interested more in, the news near them. They make the news relevant to Coventry by the amount of information, which is given in the local news is staggering to what, Radio one gives for their news. Street names, name of the police station which handled the situation and where the person if treated, stayed. This gives the listener knowledge which he or she might of already knew of, giving them an idea of what's happening in their area. On conclusion the two radio stations have a lot of things in common but the differences between them are significant. Radio ones blatant attempt to make it self seem like a local radio station. Many of the conventions, which we associate, radio one as being, is portrait in the news. The cool factor is played throughout the news and the laid back approach is design so the audience will enjoy it. Kix 96 is the opposite too Radio one because, they are extremely formal on how they present the news, which signifies the audiences taste. On reflection both radio station produce a news bulletin that satisfies their target audience. The one I favour the most is Radio one because, it is specially designed for my age group and the laid back approach on the telling of the news, is something unique. 1 ...read more.