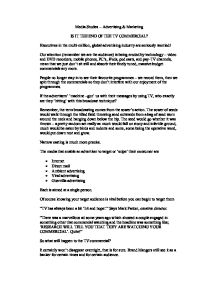 Is it the end of TV Commercials?

Media Studies - Advertising & Marketing IS IT THE END OF THE TV COMMERCIAL? Executives in the multi-million, global advertising industry are seriously worried! Our attention (remember we are the audience) is being eroded by technology - video and DVD recorders, mobile phones, PC's, iPods, pod casts, and pay-TV channels, mean that we just don't sit still and absorb their finely tuned, massive budget commercials any more. People no longer stay in to see their favourite programmes - we record them, then we spin through the commercials so they don't interfere with our enjoyment of the programmes. If the advertisers' 'machine -gun' us with their messages by using TV, who exactly are they 'hitting' with this broadcast technique? ...read more.

Narrow casting is much more precise. The media that enable an advertiser to target or 'snipe' their consumer are * Internet * Direct mail * Ambient advertising * Viral advertising * Guerrilla advertising Each is aimed at a single person. Of course knowing your target audience is vital before you can begin to target them "TV has always been a bit 'hit and hope'." Says Mark Parker, creative director. "There was a marvellous ad some years ago which showed a couple engaged in something other that commercial watching and the headline was something like; 'RESEARCH WILL TELL YOU THAT THEY ARE WATCHING YOUR COMMERCIAL'. ...read more.

Children and their kids TV? Well perhaps not. ITV (UK) has already tried to unload all its kids TV as it recognises it has very little brand interest in kids. OFCOM reined them back but we know, don't we, that they will be buying their programming in from overseas and that their in-house teams are already on their last legs. Where will the advertiser go instead? Have a look at 'Subservient Chicken'. Burger King's 'old hat' site which works virally. No longer does the advertiser have to go looking for the audience - the audience goes looking for it - it works via word of mouth - virally! TV advertising may not yet be dead but it is in a critical condition. ...read more.