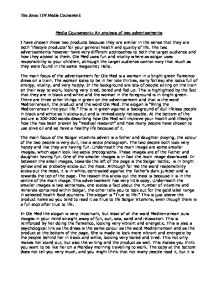 Media Coursework: An analysis of two advertisements I have chosen these two products because they are similar in the sense that they are both 'lifestyle products' for your general health and quality of life. The two advertisements however have very different approaches to both the target audience and how they appeal to them. Ole Med uses fun and vitality where as solgar uses responsibility to your children, although the target audience cannot vary that much as they were found in the same magazine; Hello. The main focus of the advertisement for Ole Med is a woman in a bright green flamenco dress on a train. The woman looks to be in her late thirties, early forties; she looks full of energy, vitality, and very happy. In the background are lots of people sitting on the train on their way to work, looking very tired, bored and fed up. This is highlighted by the fact that they are in black and white and the woman in the foreground is in bright green. ...read more.

The slogan is "True to life." This is just above the product name so you tend to read it as True to life Solgar Vitamins, even though there is a full stop after true to life. In Ole Med the slogan is very important, but most of all the word Mediterranean puts images in your mind straight away of fun, sun, sea, sand and relaxation. This is reinforced by her doing the flamenco, looking very vibrant and energetic. This is also a psychological link as the dress is the same colour as the word Mediterranean and as the product at the bottom of the page. She is made to look more vibrant and energetic by the people behind her in black and white, looking very bored and tired. This not only makes her stand out, but also the writing and the product as well. This makes you think you want to be like her on a Monday morning travelling to work. The copy at the bottom does not tell you very much, and you might think that not many people read it, but it is still important. ...read more.

I think this is because the image is a personal experience, a one on one and by showing the father and daughter it shows that it is not just aimed at women. Obviously though it is aimed at women as well because the advertisement was in Hello, a magazine chiefly read by women. I have looked at both advertisements and analysed them carefully. I think that Ole Med is a far more effective advertisement than Solgar because it is appealing to it's audience more. In Ole Med it is very clear that the audience it is aimed at is the people sitting on the train. The Solgar advertisement is aimed at the same audience; as it is in the same magazine, but it is doing it in a very different way to Ole Med. It is appealing to the family side, as opposed the work aspect. I think this is less effective because people go to work in a hurry, maybe miss breakfast or lunch etc... Where as a family is linked with very wholesome, healthy eating which one would hope, would not require vitamins. Tim Jones 11N ?? ?? ?? ?? Tim Jones 11N Media Coursework ...read more.