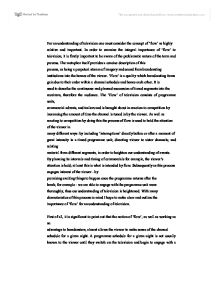 What is the significance of 'flow' for an understanding of television?.

For an understanding of television one must consider the concept of 'flow' as highly relative and important. In order to examine the integral importance of 'flow' to television, it is firstly important to be aware of the problematic nature of the term and process. The metaphor itself provides a concise description of this process, as being a perpetual stream of imagery and sound from broadcasting institutions into the homes of the viewer. 'Flow' is a quality which broadcasting items gain due to their order within a channel schedule and hence each other. It is used to describe the continuous and planned succession of timed segments into the receivers, therefore the audience. The 'Flow' of television consists of programme units, commercial adverts, and trailers and is brought about in reaction to competition by increasing the amount of time the channel is tuned in by the viewer. As well as reacting to competition by doing this the process of flow is used to hold the attention of the viewer in many different ways: by including 'interruptions' directly before or after a moment of great intensity in a timed programme unit; directing viewer to sister channels; and relating material from different segments, in order to heighten our understanding of events. ...read more.

By meticulously positioning the play in a channel schedule, the play and its social and political concerns were given full attention, therefore almost forcing the audience to engage with important issues. Jonathan Bignell talks of flow in 'grouping' certain programme items together: "...by looking not only at individual programmes but also at the ways they link together. These links might be in terms of the similarities of one programme with another...or the conventions that the makers adhere to." ( Bignell 2004: 4 ) This timed arranging of programming units can therefore effectively hammer home certain points and sufficiently educate the audience to changes and issues in their society. The viewer is therefore able to understand what is going on around them, as well as understanding what the importance of television is in our society as a whole. With this process of 'flow' in mind, it is evident of television's impact it can have on an audience, by forcefully presenting them with an abundance of relevant material. It is apparent from this, the effect that television, with its use of planned 'flow', can have on society as a whole and on the issues it chooses to broadcast. We engage with television in many different ways and not always as closely as to, let us say, cinema. ...read more.

Flow here is essential to the development of the plot, and acts as an entity holding together the narrative, which in turn enhances the audiences' understanding of it. With these main points in mind, it is clear to see that 'flow', as well as being the "defining characteristic of television", is integral to our understanding of television, as both a narrative and as a messenger to our society. The ways in which we talk of 'watching television' clearly shows that this is the most desirable way to interpret it; without the use of 'flow' the idea of watching television as a sequence would be eradicated. Instead the audience would be, in a way, unable to 'watch television' and be virtually forced to watch programme units individually with no relation to one another. Although a fairly complex idea and process, in a way, 'flow' makes for a fairly unproblematic means to viewing television; as the sequence allows us to understand, for example, key moments in drama and important concerns in real society, due to the relative programme units they are placed beside. As a metaphor 'flow' relates to the ways in which we are carried through various programme units with force, but also the way we can watch quite calmly "at a distance". This is the characteristic way we experience television, therefore of characteristic importance to our understanding of television. ...read more.