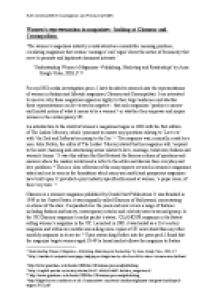 Womens representation in magazines - looking at Glamour and Cosmopolitan.

﻿Ruth AndrewsMS3 Investigation and Production5605 Women?s representation in magazines - looking at Glamour and Cosmopolitan. ?The women?s magazines industry is understood as a monolithic meaning-producer, circulating magazines that contain ?messages? and ?signs? about the nature of femininity that serve to promote and legitimate dominant interests.? ?Understanding Women?s Magazines ?Publishing, Marketing and Readerships? by Anna Gough-Yates, 2003, P.7[1] For my MS3 media investigation piece, I have decided to research into the representations of women in fashion and lifestyle magazines, Glamour and Cosmopolitan. I am interested to uncover why these magazines appeal so highly to their target audience and whether these representations can be viewed as negative - that such magazines ?produce a narrow and limited notion of what it means to be a woman?[2] or whether they empower and inspire women in the contemporary UK. An introduction to the world of women?s magazines began in 1963 with the first edition of The Ladies' Mercury, which ?promised to answer any questions relating to ?Love etc.? with ?the Zeal and Softness becoming to the Sex?.[3] The magazine was, ironically, made by a man. John Delton, the editor of The Ladies? Mercury stated that his magazine will ?respond to the most charming and entertaining issues related to love, marriage, behaviors, fashion and women's humor.? It was this edition that first featured the famous column of ...read more.

Glamour magazine also holds an annual event ?The Glamour Awards? ? a ceremony to honor extraordinary and inspirational women from a variety of fields, including entertainment, business, sports, music, science/medicine, education and politics, once again representing the ideology of Glamour magazines women as multi-dimensional and not simply focused on looking good. Successful and intelligent women such as JK Rowling Helen Mirren and Elizabeth Hurley have all gained awards. [13] I specifically looked at the November 2012 issue of Glamour (seen on the right) and analysed the cover and 3 articles as part of my primary research. The cover star, Christina Hendricks is shown wit h a long shot camera angle, showing her full body. Her pose can be seen as a generic convention as to what a cover girl usually stands like, her hand on her hip with a sultry expression on her face. The cover also subtlety highlights a sexual impression, as the headlines are positioned around Christina?s curves, three of which mention the word ?sex? or ?hot?. This is a direct representation that mirrors Christina?s reputation for being admired by women and attractive to men by her sexual confidence in her TV persona in hit US show Mad Men. Cosmopolitan was initially printed as a family magazine ?The Cosmopolitan? in 1886 in the USA by Schlicht and Field. ...read more.

Women don?t want to be ?less than? the standard presented to them page after page in Cosmopolitan and Glamour. Further into my research I conducted a questionnaire on women?s magazines which I gave out to 30 people. The majority of these people (21 out of 30) selected that the cover star would be the main reason for them buying a magazine, another 14 of the women asked, chose that they found cover star/celebrity interviews to be the most interesting part of a magazine. This shows that the cover star has a huge impact when looking at the readership and it is subsequently vital how the magazines represent these women. After conducting my research, I have come to the conclusion that I would like to produce my own women?s magazine - following the same codes, conventions, representations and layouts of Glamour and Cosmopolitan in order to address and reinforce my findings. I will compile articles that reflect a similar ideology and advertisements that are similar to those of a real women?s lifestyle magazine. ________________ [1] Understanding Women?s Magazines ?Publishing, Marketing and Readerships? by Anna Gough-Yates, 2003, P.7 [2] http://mediacrit.wetpaint.com/page/Judging+a+Magazine+by+its+Cover%3A+How+Women+are+Defined [3] http://www.guardian.co.uk/books/2008/dec/20/women-pressandpublishing [4] http://english.pravda.ru/society/stories/01-07-2010/114087-fashion_magazine-0/ [5]5 http://www.guardian.co.uk/books/2008/dec/20/women-pressandpublishing [6] http://digital-assets.condenast.co.uk.s3.amazonaws.com/static/condenast/glamour-integrated-mediapack-august-2012.pdf [7] http://digital-assets.condenast.co.uk.s3.amazonaws.com/static/condenast/glamour-integrated-mediapack-august-2012.pdf [8] http://digital-assets.condenast.co.uk.s3.amazonaws.com/static/condenast/glamour-integrated-mediapack-august-2012.pdf [9] http://abhastingsa2media.blogspot.co.uk/2012/09/psychographic-society-groups.html [10] http://digital-assets.condenast.co.uk.s3.amazonaws.com/static/condenast/glamour-integrated-mediapack-august-2012.pdf [11] http://www.glamourmagazine.co.uk/magazine [12]http://www.mind.org.uk/news/6609_frankie_sandford_launches_glamour_magazine_mental_health_campaign_with_mind [13] http://www.glamourmagazine.co.uk/celebrity/celebrity-news/2008/06/04/glamour-awards-2008-winners [14] http://www.cosmomediakit.com/r5/home.asp [15] http://mediacrit.wetpaint.com/page/Judging+a+Magazine+by+its+Cover%3A+How+Women+are+Defined [16] http://mediacrit.wetpaint.com/page/Judging+a+Magazine+by+its+Cover%3A+How+Women+are+Defined [17] http://www.guardian.co.uk/lifeandstyle/2012/may/13/eva-wiseman-womens-magazines [18] Reading Women?s Magazines? by Joke Hermes [19] http://www.youtube.com/watch?v=_FpyGwP3yzE ...read more.