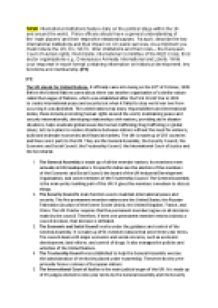 Public Services: international institutions. Police officers should have a general understanding of the main players and their respective missions/causes

﻿TASK International institutions feature daily on the political stage within the UK and around the world. Police officers should have a general understanding of the ?main players? and their respective missions/causes. As such, describe the key international institutions and their impact on UK public services. As a minimum you must include the UN, EU, NATO, other institutions and their roles ? the European Court of Human rights, World Bank, International Committee of the RED Cross, third sector organisations e.g., Greenpeace Amnesty International and Liberty. Write your response in report format containing information on historical development, key functions and membership. (P1) P1: The UN stands for United Nations. It officially came into being on the 24th of October, 1945. Before the United Nations came about there was another organisation of a similar nature called the League of Nations, which was established after the First World War in 1919 to create international peace and security but when it failed to stop world war two from occurring it was abolished. The united nations has many responsibilities and international duties, these include promoting human rights around the world, maintaining peace and security internationally, developing relationships with nations, providing aid in disaster situations, helps eradicate global issues like human trafficking/drug trafficking or global issues, acts as a place to resolve situations between nations without the need for violence, build and maintain economies and financial markets. ...read more.

The EU was also created to increase trade opportunities between the nations of Europe. The founders of the EU are Belgium, France, Germany, Italy, Luxembourg and The Netherlands. There are 27 member states of the EU. There are strict criteria that need to be met to join the EU, these are known as the ?Copenhagen Criteria? which includes having a free-market economy, a stable democracy and rule of the law and the acceptance of all EU laws and trading standards amongst many other things. Each member has to contribute funds and this is used to their finance their activities. The impact the EU has on UK public services are anti-terror laws, terrorism and border control and the single currency. The North Atlantic Treaty Organisation, NATO, was created on the 4th of April 1949 between 10 European and two North American nations that was dedicated to defending each other in the case of an attack from the Soviet Union which was very powerful at that time. Nowadays they are there to protect each other from any attack and an attack on one of them is seen as an attack on all of them. NATO has 28 Members in 1949 when it was formed it contained 12 members these being, Belgium, Canada, Denmark, France, Iceland, Italy, Luxembourg, the Netherlands, Norway, Portugal, The United Kingdom and The United States. ...read more.

to organise nursing and care for those who are wounded on the battlefield 3. to supervise the treatment of prisoners of war 4. to help with the search for missing persons in an armed conflict 5. to organise protection and care for civil populations 6. to act as a neutral intermediary between warring parties http://www.icrc.org/eng/index.jsp Greenpeace amnesty international Greenpeace is a non-governmental environmental organisation with offices in over forty countries and with an international coordinating body in Amsterdam, the Netherlands. Greenpeace promotes environmental protection. Greenpeace says its goal is to "ensure the ability of the Earth to nurture life in all its diversity" and focuses its campaigning on worldwide issues such as global warming, deforestation, overfishing, commercial whaling and anti-nuclear issues. Founded in 1971 they mainly focus on protests and petitions to stop environmental atrocities from taking place. Greenpeace uses direct action, lobbying and research to achieve its goals. Amnesty International is a non-profit, non-governmental organisation which was founded in London following the publication of the article "The Forgotten Prisoners" by Peter Benenson in 1961. Amnesty International promotes awareness of human rights and opposes specific abuses of human rights including prisoners of conscience, taking of hostages, use of torture and the death penalty. Amnesty draws attention to human rights abuses and campaigns for compliance with international and standards and it works to activate public opinion to put pressure on governments that let abuse take place. ...read more.