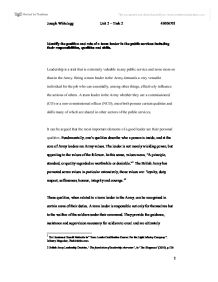 Roles and Responsibilities of a Team Leader

Identify the position and role of a team leader in the public services including their responsibilities, qualities and skills. Leadership is a trait that is extremely valuable in any public service and none more-so than in the Army. Being a team leader in the Army demands a very versatile individual for the job who can essentially, among other things, effectively influence the actions of others. A team leader in the Army whether they are a commissioned (CO) or a non-commissioned officer (NCO), must both possess certain qualities and skills many of which are shared in other sectors of the public services. It can be argued that the most important elements of a good leader are their personal qualities. Fundamentally, one's qualities describe who a person is inside, and at the core of Army leaders are Army values. The leader is not merely wielding power, but appealing to the values of the follower. ...read more.

The leader must exercise certain skills in demanding situations many of which are mental attributes. They are expected to hold a significant amount of intellectual ingenuity and use initiative and quick thinking to overcome certain obstacles under immense pressure with poise and grace. They must be able to problem solve and provide a variety of solutions with multiple outcomes. Again, through these skills they are helping their subordinates develop and are gaining their trust and confidence. "Intellectual stimulation helps followers to question assumptions and to generate more creative solutions to problems."4 As well as the desire and willingness to lead, individuals who assume leadership roles must possess certain skills away from the field. A large part of this falls under their ability to organise. They are expected to undertake plenty of paperwork including preparing reports and maintaining records of their activities be they accomplishments or failures. "The team leader not only sets the example, but he is also the grease on the axle that keeps the administrative wheels of the platoon rolling ...read more.

"In the chaos of battle, it is essential to decentralize decision authority to the lowest practical level."6 This statement underlines the need for strong initiative skills within the role of the NCO. It is always a possibility that a team leader in the Army, especially in combat situations, becomes the NCO. Such team leaders must possess the skills to be ready to step into command positions and have the personal confidence and knowledge to lead in the absence of direction. As well as mental attributes the Army team leader must also possess physical attributes also. Operations in the field not only result in mental stress, requiring the leader to have considerable mental skills in the form of thinking clearly, but also physical weariness and exhaustion. To some extent these go hand-in-hand as "a high-level of physical fitness prevents decision-making ability from being clouded in times of stress of exertion."7 Primarily the team leader, regardless of which public sector they are in, must possess both a high level of personal qualities and certain skills applicable to that position in order to complete their respective duties successfully. ...read more.