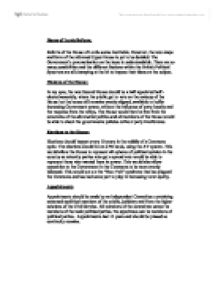 House of Lords Reform. Reform of the House of Lords seems inevitable. However, the new shape and form of the reformed Upper House is yet to be decided. The Government's procrastination on the issue is understandable. There are so many possibilities and the different factions within the British Political Spectrum are all champing at the bit to impose their ideas on the subject. Makeup of the House: In my eyes, the new Second House should be a half appointed half-elected assembly, where the public get to vote on the makeup of the House but the house still remains evenly aligned, available to buffer increasing Government power, without the influence of party loyalty and the response from the whips. ...read more.

This would allow the House to represent all spheres of political opinion in the country as minority parties who get a spread vote would be able to represent those who wanted them in power. This would also allow opposition to the Government in the Commons to be more evenly balanced. This would cut out the "Boo-Yah" syndrome that has plagued the Commons and has had some part to play in increasing voter apathy. Appointments Appointments should be made by an Independent Committee containing esteemed apolitical members of the public, judiciary and from the higher echelons of the Civil Service. ...read more.