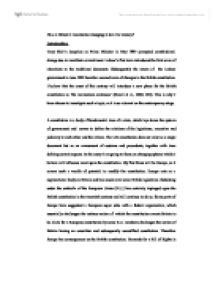 How is Britain's constitution changing in the 21st century?

How is Britain's constitution changing in the 21st century? Introduction: Tony Blair's inception as Prime Minister in May 1997 prompted constitutional change due to manifesto commitment. Labour's first term introduced the first wave of alterations to the traditional document. Subsequently the return of the Labour government in June 2001 heralds a second wave of changes to the British constitution. I believe that the onset of this century will introduce a new phase for the British constitution as 'the momentum continues' (Hazell et al., 2000, 260). This is why I have chosen to investigate such a topic, as it is so relevant on the contemporary stage. A constitution is a body of fundamental laws of a state, which lays down the system of government and serves to define the relations of the legislature, executive and judiciary to each other and the citizen. The UK constitution does not exist as a single document but as an amassment of customs and precedents, together with laws defining certain aspects. In the essay I am going to focus on changing spheres which I believe will influence most upon the constitution. My first focus will be Europe, as it covers such a wealth of potential to modify the constitution. Europe acts as a supranational body on Britain and has assent over some British legislation. Subsisting under the umbrella of the European Union (E.U.) has certainly impinged upon the British constitution in the twentieth century and will continue to do so. Some parts of Europe have suggested a European super state with a federal organisation, which essentially challenges the unitary notion of which the constitution exacts Britain to be. Calls for a European constitution by some E.U. members challenges the notion of Britain having an unwritten and subsequently uncodified constitution. Therefore Europe has consequences on the British constitution. Demands for a Bill of Rights in the British constitution may have been secured by the incorporation of the European Convention on Human Rights (ECHR), which acts as an international guideline on human rights. ...read more.

It smacks of a McCarthy stained state, and is in direct contention to a democracy and ultimately the idea of a constitution. Devolution and the Scottish Parliament A favoured part of New Labour's constitutional reform programme was devolution to Scotland, Wales and the Greater London Assembly. This has changed the form of Britain. Arguably Britain is still an unitary state though certain amounts of power have been devolved to these sub-national bodies, yet Westminster retains parliamentary sovereignty. As easily as this power was devolved, it can be retained. The main focus of constitutional implications will be the Scottish Parliament, though Wales does have some extent of power. Devolution is in direct contrast to the question of Europe usurping Britain's sovereignty. Westminster has been active in dispensing power to national administrations. The capital also has a measure of power issued to it; that of the Greater London Assembly. The moves to give away power does have huge consequences. Westminster 'retains absolute sovereignty, it can choose to legislate on whatever it likes' (Cowley, 2000, 121). However this can be questioned by the use of referenda. If a government is deemed to be legitimate, the use of referendum means that its result is likely to be binding. It is unlikely that central government would retain the powers now vested in the Scottish Parliament, the Welsh Assembly and the Greater London Assembly, especially as devolution has been consecrated by referenda. The people have voted, and the government would be unwise to challenge this validity. Therefore I cannot agree with Bogdanor when he claims that 'too great a concern was shown to preserve the shell of parliamentary sovereignty' (Bogdanor, 2001, 148). I think that it would be unlikely that a government would take back power it has given away, especially when Europe seems to intensified national feelings for some kind of independence. Studlar recognises the Scottish National Party's committal for independence in Scotland. ...read more.

The ECHR has been fostered but skirted in some cases post-September eleventh. Power has been devolved beyond the Celtic borders, but not to England or its regions. The House of Lords has faced part change, but the power-wielding Commons has been excused. The liberal first draft of legislation relating to F.O.I. was discarded, and in its place was a rather more restricting document. Evidently, the constitution is moderately changing to the Prime Minister's strategy. Johnson considers that there has been a rejection of reforms that would threaten to impose genuine checks on the political discretion of an over-mighty executive acting in the name of a plaint parliamentary majority in the House of Commons (Johnson, 2000, 348-349). Rather than reforming the constitution, I believe Blair is renewing it to his advantage. It would be ludicrous for Blair to impose constitutional reform that would serve to expose and threaten his firm grip on power. The twenty first century has seen Blair assure his second term in power. Sweeping constitutional reform has been avoided, whereas limited changes are observable. Until a political party is courageous enough to push for reforms that will significantly alter the nature of the constitution, it will be plied as an instrument to ensure an executive's dominance. The contemporary political climate is far removed from that in 1997. When New Labour took power, the constitution was ripe for change. Respect for Parliament had fallen to an all-time low; Scotland was estranged due to a foisted Conservative dominance; civil rights were unguarded and above all, Britain's constitution had for too long instated too much power in the unchecked executive. Blair's changes have worked to appease these original problems, however as his popularity wanes, it will become apparent of his cautious reforms. As Western Europe integrates further, its implications on Britain will be profound. Europe has the ability to change the constitutional structure of Britain, but it is not presented as imperative at the moment. At present the constitution serves to preserve Blair's administration. However as a new political era in Europe approaches, I believe the British constitution will be regarded as defunct. ...read more.