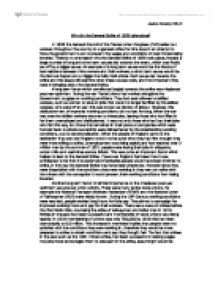 Why did the General Strike of 1926 take place? In 1926 the General Council of the Trades Union Congress (TUC) called out workers throughout the country on a general strike for nine days in an attempt to force the government to act to prevent the wages and conditions of coal miners being lowered. There is no one reason why the General Strike of 1926 took place, instead a large number of long and short term causes led towards the event, which was finally set off by a trigger cause. An example of a long term cause would be the history of bad relations between mine owners and their workers, a short term cause would be the Samuel Report and a trigger the Daily Mail article. Each cause led towards the strike and this essay will examine what these causes were, and how important they were in bringing about the General Strike. A long-term factor which contributed largely towards the strike was misplaced post-war optimism. During the war Trade Unions had worked alongside the Government to agree on working conditions. They had even allowed unskilled workers, such as women to take on jobs that could no longer be filled by the skilled workers, who were off at war- this was known as dilution of labour. However, this disillusionment of improved working conditions did not last for long. ...read more.

However, in 1921 they were handed back to private ownership ruining these illusions and caused the miners to strike. Black Friday shows that the miners had been unhappy with the pay they had been receiving for a long time before 1927, so they were very likely to strike again in an attempt to gain higher wages. It also shows there had been a history of poor relations between miners and their employers- this was not the only time that they had previously gone on strike. The workers were dissatisfied with the mines they worked in being privately owned and wanted the industry to become nationalised again as they had seen this as much more fair. Black Friday was not so much a very important factor leading to the General Strike, but a warning an event such as this would occur. If the miners had been given what it was they wanted at this point in time then the strike could very easily have been prevented. Government policy was a short term factor which helped lead to the General Strike, which was particularly significant. The government realised the risky conditions many miners were working in and tried to help end them, however they did not succeed. They firstly subsidised the coal industry with �10 million per year for a total of four years, believing this would prime the pump and by the time this period was over coal prices would have risen. ...read more.

This was the most important factor leading to the strike because at any other point the strike could have been prevented however after this event the strike was most definitely inevitable. In conclusion there were many factors leading to the General Strike and they were all equally important as each other. If any one of the events had not happened the strike would have been prevented, there were many points where it could have been prevented. It was only after the Government had called off the negotiations that the strike became inevitable, perhaps making this the principal cause of the strike and the Government the group ultimately to blame. However, all four groups involved in the strike share part of the blame for what came. The government called off the negotiations when times were at the most precarious and the measures they took to prevent the strike made things worse, if anything. The mine owners and workers each refused to negotiate, the owners were not successful in convincing the workers it was necessary for their wages to be lowered. The TUC were also partly to blame since they got drawn into a strike which they did not believe would be of use to anyone. The mine workers and owners were mainly to blame since they did nothing to resolve the situation, whereas the Government and the TUC did try and negotiate and come to a fair conclusion. Jessica Crawley 10NJE ...read more.