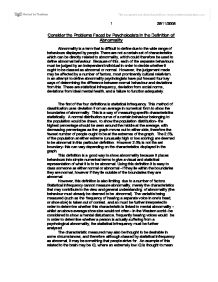 Consider the Problems Faced by Psychologists in the Definition of Abnormality

Consider the Problems Faced by Psychologists in the Definition of Abnormality Abnormality is a term that is difficult to define due to the wide range of behaviours displayed by people. There are not a certain set of characteristics which can be directly related to abnormality, which could therefore be used to define abnormal behaviour. Because of this, each of the separate behaviours must be judged by an independent individual in order to decide whether it ought to be classed as abnormal or normal. However, the judgement made may be affected by a number of factors, most prominently cultural relativism. In an attempt to define abnormality psychologists have put forward four key ways of determining the difference between normal behaviour and deviations from this. These are statistical infrequency, deviation from social norms, deviations from ideal mental health, and a failure to function adequately. The first of the four definitions is statistical infrequency. This method of classification uses deviation from an average in numerical form to show the boundaries of abnormality. This is a way of measuring specific characteristics statistically. A normal distribution curve of a certain behaviour belonging to the population would be drawn, to show the population distribution- the highest percentage should be seen around the middle at the average, with decreasing percentages as the graph moves out to either side, therefore the fewest number of people ought to be at the extremes of the graph. The 2.5% of the population at either extreme (unusually high or low scoring) are deemed to be abnormal in this particular definition. However 2.5% is not the set boundary- this can vary depending on the characteristics displayed in the graph. This definition is a good way to show abnormality because it places behaviours into simple numerical terms to give a visual and statistical representation of what it is to be abnormal. Using this definition it is easy to class someone as either normal or abnormal- if they lie within the boundaries they are normal, however if they lie outside of the boundaries they are abnormal. ...read more.

It is considered that a rapist or murderer's personality is displaying abnormality, not only their behaviour. If only the behaviour (not the character) was abnormal there is a suggestion that anyone would be capable of such an act. This is opposed by the fact that other people are either incapable of committing such a crime or are in control of themselves and so choose not to commit such a crime. There seems to be a key difference between those who would murder someone and those who wouldn't, which must be caused by personality differences. Most people have the capacity to pick up a knife and stab someone to death, however not everyone does- only those with a severe disturbance or psychological problem, other people have the ability to control themselves and prevent such a frenzy. Deviation from social norms can be used to monitor the behaviour of people in the same culture and in a known context by an independent judge. If the same judge were to enter a different culture or unknown context the reliability of their diagnosis of abnormality would be significantly less reliable. As most people are biased in someway; whether it be age group, culture or otherwise, it is difficult to find someone who can be a truly independent judge and can make an unaffected decision. It may be possible to determine whether a friend or family member starts experiencing psychological problems, as there will be a deviation from their normal behaviour; however it is more difficult to make a similar decision based on the behaviour of someone who isn't known as well. Deviation from social norms is so dependent on culture and other factors that this definition of psychological abnormality is severely limited. However it does have its strengths in some particular circumstances. The third definition is deviation from ideal mental health. This was originally suggested by Jahoda in 1958, and was unique at the time as it did not focus on what it was to be abnormal but instead what it was to be normal. ...read more.

For this reason the African-Caribbean immigrants are 2-7 times more likely to be diagnosed with schizophrenia that a British person, as discovered by Cochrane (1977). This may be due to their differences in communications, or their religious beliefs. Cultural changes may also affect a diagnosis- as times change, so do social norms. In the UK, women who were unmarried and pregnant used to be sent to mental asylums as they were seen to be abnormal and the situation was socially unacceptable. Today this is very different; single mothers are accepted in society and are seen as normal by most generations. Similarly with homosexuality; this was illegal in the UK until 1967, and was considered to be a mental disorder in the USA until 1973. Once again, cultural changes mean that homosexuality is now generally accepted and is no longer illegal, although some people still hold old values or religious beliefs and refuse to tolerate this. The definitions of abnormality offered by psychologists are subject to many biases and constrictions due to circumstances, especially being affected by cultural relativism. Each has its strengths and is applicable within separate cultures; however the limitations are also vast. Due to cultural differences not one single definition can be applied world-wide, and this is unlikely to ever be possible whilst maintaining a high level of reliability. It is important to understand the differences between cultures and the limitations of each definition so that psychologists are able to make well-informed and accurate diagnoses. The four definitions offered show much conflict between each other, due to the way in which abnormality is measured. An individual may appear to be normal according to one definition, but abnormal in another. Because of this psychologists must look at the whole picture- the circumstances, the person's personality, the culture, their ability to function appropriately, as well as other factors- in order to make an accurate and reliable decision of a diagnosis. A combination of aspects of each definition may be useful in doing this. ?? ?? ?? ?? 1 28/11/2008 ...read more.