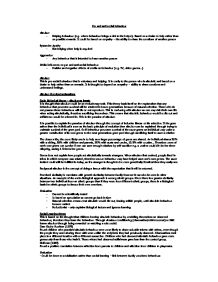 Pro and anti social behaviour Altruism - Helping behaviour (e.g. where behaviour brings a risk to the helper). Based on a desire to help rather than on possible rewards. It could be based on empathy - the ability to share the emotions of another person Bystander Apathy - Not helping when help is required Aggression - Any behaviour that is intended to harm another person Media Influences on pro and anti social behaviour - Positive and negative effects of media on behaviour (e.g. TV, video games...) Altruism This is pro-social behaviour that is voluntary and helping. It is costly to the person who is altruistic and based on a desire to help rather than on rewards. It is thought to depend on empathy - ability to share emotions and understand feelings. Altruism theories/explanations Socio biological theory - altruism as innate It is thought that altruism could be an evolutionary trait. This theory basis itself on the explanation that any behaviour that promotes survival will be retained in future generations because of natural selection. Those who do not possess these behaviours will die or not reproduce. This is confusing with altruism as one may risk their own life when acting altruistically, therefore sacrificing themselves. This means that altruistic behaviour would be die out and selfishness would be selected in. This is the paradox of altruism. It is possible to explain the paradox of altruism through the concept of inclusive fitness or kin selection. If the gene rather than the individual is seen as the basic principle of evolution then altruism can be explained through trying to maintain survival of the gene pool. So if behaviour promotes survival of the same genes an individual may make a greater contribution of its own genes to the next generations gene pool through sacrificing itself to save a relative. The closer a kin, the more likely one is to help as a larger percentage of genes are shared. ...read more.

Only two people, the neighbour who phoned the police and another woman were on the street to report to them, nobody else came forward. Even the neighbour had said he didn't want to get involved. Six days later an arrest was made and a man was admitted for psychiatric observation. After the event police stressed how an earlier phone call to them could have saved Kitty. 39 witnesses from the neighbourhood had no good reason for not calling them, except that they were afraid as it was violent. All answered police question in the days following the murder and seemed shocked that they hadn't done anything. The bystander effect/apathy/intervention/Genovese syndrome The phenomenon in which someone is less likely to react in an emergency situation when other people are around and able to help then when they are alone. Pluralistic Ignorance Pluralistic ignorance occurs when individual members of a group (such as a school, a team, a workplace, or a group of friends) believe that others in their group hold comparably more or less extreme attitudes, beliefs, or behaviours. When many members of any one group hold the same misperception about the group norm, this norm ceases to represent the actual composite beliefs and attitudes of the group. In other words, there is an actual group norm, comprised of the actual average attitudes, beliefs, and behaviours of all individuals in the group, and there is a perceived norm, which is the group-wide assumption of extremity in the attitudes, beliefs, and behaviours of other group members. This can lead to the bystander effect. Bystander behaviour Diffusion of responsibility: Responsibility is less if others are present as no one person will hold personal responsibility, instead it will be spread among bystanders. If a crime or other incident is being observed by a number of people, the blame for helping will be spread among them rather than aimed at one person. ...read more.

giving blood) Weaknesses: - Model does not provide a detailed account of the processes involved in decision making - De-emphasises the influence of emotional factors on the bystanders behaviour - Assumes a logical sequence of thought which may not occur in an emergency - Pays more attention as to why people don't help rather than why they do - Places all emphasis on presence of others judging whether or not a person will be helped and ignores other decisions e.g. victim characteristics - Piliavin's train experiment contradicted this model, opposing the diffusion of responsibility Piliavin's arousal-cost reward model Piliavin (1981) put forward an arousal cost-reward model as an alternative to the decision model. According to this model there are five steps that bystander go through before deciding to help a victim. 1. Becoming aware of someone's need for help; this depends on attention 2. Experience of arousal - feeling happy or sad - internal physiological state 3. Interpreting cues and labelling their state of arousal - victims characteristics, situational characteristics, what is causing arousal? 4. Working out the rewards and costs associated with different actions. Costs of helping - physical harm, delay in carrying out other activities; costs of not helping - ignoring personal responsibility, guilt, criticism, ignoring similarity; Rewards of helping - praise from victim, satisfaction of helping; rewards of not helping - be able to continue with other activities as normal 5. Making a decision and acting on it Evaluation: Strengths: - Provides a more complete account than the decision model of the processes involved in determining whether to provide help - Bystanders often take into account of the costs and rewards of helping and not helping - Bystanders are more likely to help when they experience a negative state of arousal associated with the situation Weaknesses: - It is implied that bystanders spend time considering all elements before deciding what to do - Doesn't take into account of impulsive actions - Unlikely that all relevant costs and rewards are considered - Bystanders do not always need to experience arousal before helping ...read more.