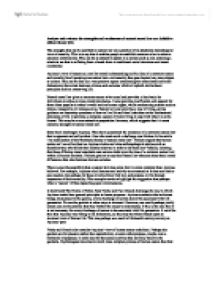 Analyse and evaluate the strengths and weaknesses of natural moral law as a definitive ethical theory (12) The strengths that can be ascribed to natural law are a product of its absolutist deontological view of morality. This is to say that it enables people to establish common rules in order to structure communities. This can be an attractive option in a society such as our, enduring a relativist era that is suffering from a break down in traditional social structures and moral uncertainty. Aquinas's view of reason as a tool for moral understanding and his idea of a common nature and morality for all people gives natural law a universality that goes beyond any one religion or culture. This can be seen as a very positive aspect considering the intercultural strife and disharmony that exists between cultures and societies which all uphold similar basic principles such as conserving life. Natural moral law gives a concrete reason to be moral and provides a firm basis for individuals to refuse to cross moral boundaries. ...read more.

Aquinas maintains that as human beings must preserve the species, every discharge of semen should be associated with life generation. To use the genitals in other ways is immoral. However, one could perhaps justify sexual acts on the premise that they further the couple's relationship. If this is the case then it is not necessary for every discharge of semen to be associated with life generation. It could be then that Aquinas was wrong in his deductions, as they may have been based upon an incorrect view of human life. This was perhaps as a result of thirteenth century naivety on Aquinas' part. Vardy and Grosch also consider Aquinas' view of human nature unholistic. Perhaps the genitals are for pleasure rather than reproduction, or some other purpose, maybe even a multitude of purposes. It could also be that sexual activity does not only found in the genitalia. Psychologists have drawn much more complex pictures of human nature than that presented in Aquinas' simplistic account. In contrast to Aquinas' apparent belief in a fragmented collection of parts, today the human body is seen as one psychophysical whole. ...read more.

Given the criticisms raised against natural law, it is worth pointing out that natural law may not be as rigid as it my first appear. Aquinas observed that although primary precepts were unchangeable, the secondary precepts might change in some particular aspects, or in a case in which special reasons make it impossible to observe them. In trying to decide then, if natural moral law can be held as a definitive ethical theory one has to realise that although the theory isn't as rigid as it first appears it is still faced with problems, which may well, be insurmountable. The conclusions of the Roman Catholic Church regarding the prohibition of activities such as artificial contraception and homosexual acts, as already shown, can be subject to convincing challenge. It is also important to note that in the absence of clear guidelines it is impossible to know definitively what is and what is not natural and so therefore rendering the issue wholly subjective. Once an issue becomes subjective, and it is difficult to produce an instance when subjectivity would be absent, natural moral law has to fail as a definitive ethical theory. ?? ?? ?? ?? ...read more.