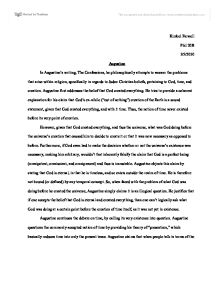 Augustine on creation and Aquinas on the existence of God.

Kimbel Farwell Phil 20B 1/5/2010 Augustine In Augustine's writing, The Confessions, he philosophically attempts to answer the problems that arise within religion, specifically in regards to Judeo Christian beliefs, pertaining to God, time, and creation. Augustine first addresses the belief that God created everything. He tries to provide a coherent explanation for his claim that God's ex-nihilo ("out of nothing") creation of the Earth is a sound statement, given that God created everything, and with it time. Thus, the notion of time never existed before its very point of creation. However, given that God created everything, and thus the universe, what was God doing before the universe's creation that caused him to decide to create it or that it was now necessary as opposed to before. Furthermore, if God even had to make the decision whether or not the universe's existence was necessary, making him arbitrary, wouldn't that inherently falsify the claim that God is a perfect being (omnipotent, omniscient, and omnipresent) and thus is immutable. Augustine objects this claim by stating that God is eternal, in that he is timeless, and so exists outside the realm of time. He is therefore not bound (or defined) by any temporal concept. So, when faced with the problem of what God was doing before he created the universe, Augustine simply claims it is an illogical question. He justifies that if one accepts the belief that God is eternal and created everything, than one can't logically ask what God was doing at a certain point before the creation of time itself, as it was not yet in existence. ...read more.

He explains that this phenomenon exists within the mind in three different forms of reality. The three realities of the mind are comprised of when the mind expects, attends, or remembers. In other words, that what the mind expects, passes by way of what it attends, into being what it remembers. Furthermore, it is only our attention that endures, through which what is still to be makes its way into the state of where it is no more. Therefore, our attention is continually present, as the future is being passed through the present and changes into the past. Augustine concludes that it is this "tension" or flow that constitutes time, in that time can only be understood in terms of a manmade psychological phenomenon. For Augustine, his philosophical conclusion that time doesn't exist in any tangible way but is merely a product of the human mind, justifies the claim that God's existence is outside the realm of human's perception of time. Augustine expects that from the acceptance of this notion of time, God's exemption from time in no way means that he is deficient or more limited than humans in any aspect, but that conversely, he is more powerful. Aquinas Aquinas argues the problem of God's existence in three ways: First, he addresses whether or not the existence of God is self-evident, second, whether or not his existence can be demonstrated and, finally, whether or not God actually exists. In addressing the issue of whether or not God's existence is self-evident, Aquinas provides three objections in support of the argument. ...read more.

Furthermore, building upon Aristotle's views of change, Aquinas asserts that the same rule governing change can also be applied to the argument of movement. Therefore, if in accordance with the same rule, something in motion cannot simultaneously be both the mover and moved, since something in motion must be put in motion by something other than itself. Thus, in order to find what caused the first movement to occur, one would need to trace the seminal causes of such movement back to, in effect, infinity. However, Aquinas claims it's illogical to accept that the initial force could only be defined in relation to an infinite chain of causes. Consequently, the only sound conclusion would have to include the existence of a first mover, such as something along the lines of an unmoved mover. For Aquinas, the existence of an unmoved mover/unchanged changer proves the existence of a force that could only be God. Aquinas concludes that only God could be the force behind the existence of some unmoved mover, if motion is created in two different ways. The first is exemplified by the example of some "X" (i.e. a leg) moving some "Y" (i.e. a ball). So, that in this first example, even though "X" causes the movement of "Y," it also follows that "X" is moving too. Subsequently, Aquinas concludes that given the notion that any "X" which is able to cause "Y" to move, while at the same time able to remain motionless, could only be the result of a being "X" equivalent to a much-elevated force that uniquely has to be God. ...read more.