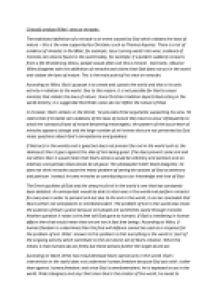 Transfer-Encoding: chunked ﻿Critically analyse Wiles? view on miracles. The traditional definition of a miracle is an event caused by God which violates the laws of nature ? this is the view supported by Christians such as Thomas Aquinas. There is a lot of evidence of miracles in the Bible, for example, Jesus turning water into wine; evidence of miracles can also be found in the world today, for example, if a patient suddenly recovers from a life threatening illness, people would often call this a miracle. Contrarily, Maurice Wiles disagrees with this definition of miracles and claims that God does not act in the world and violate the laws of nature. This is the main point of his view on miracles. According to Wiles, God?s purpose is to create and sustain the world and that is his only activity in relation to the world. ...read more.

The philosopher Keith Ward disagrees; he does not think miracles cause the moral problem of seeing the actions of God as arbitrary and partisan. Instead, he sees miracles as contributing to our knowledge and love of God. The Omni-qualities of God and the amount of evil in the world is one that has constantly been debated. An omnipotent would be able to intervene in the world and perform miracles for everyone in order to prevent evil but due to the evil in the world, it can be concluded that God is either not omnipotent or omnibenevolent. The problem of evil in the world also raises the question of God?s justice because evil people are sometimes saved through miracles. Another question it raises is the free will God gave to humans. If God is interfering in human affairs then that would mean that we are not in fact free beings. ...read more.

Ward responded to this by saying that the constraints of creation do not always allow God to act and therefore it is only possible for God occasionally to perform miracles if they serve his purposes. John Polkinghorne, a priest, has also argued against this idea, saying that God?s actions can be unexpected. The quantum theory suggests our universe has elements of indeterminism and therefore natural laws are not always predictable. Similarly, God?s miracles can be unexpected. An alternative response for this, which Wiles accepts, is to accept many of the biblical miracles, including the resurrection, as having symbolic significance rather than being seen as historical facts. In conclusion, although Wiles makes some good points and provides a believable explanation for miracles and the problem of evil, it is not widely accepted as it goes against the traditional image of God who possess? Omni-qualities and against Christian teachings. ...read more.