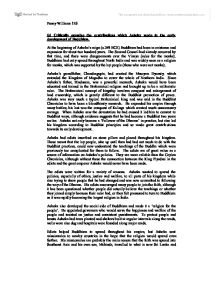 Critically examine the contributions which Ashoka made to the early development of Buddhism.

(a) Critically examine the contributions which Ashoka made to the early development of Buddhism. At the beginning of Ashoka's reign (c.269 BCE) Buddhism had been in existence and expansion for about two hundred years. The Second Council had already occurred by that time, and there were disagreements over the Vinaya (rules for the monks). Buddhism had only spread throughout North India and was widely seen as a religion for monks, which was supported by the lay people (those who were not monks). Ashoka's grandfather, Chandragupta, had created the Mauryan Dynasty, which extended the Kingdom of Magadha to cover the whole of Northern India. Since Ashoka's father, Bindusara, was a powerful monarch, Ashoka would have been educated and trained in the Brahminical religion and brought up to be a militaristic ruler. The Brahminical concept of kingship involves conquest and enlargement of land ownership, which is greatly different to the Buddhist promotion of peace. Ashoka was very much a typical Brahminical king, and was said in the Buddhist Chronicles to have been a bloodthirsty monarch. He expanded his empire through many battles; his last was the conquest of Kalinga which created much unnecessary carnage. ...read more.

Edicts helped Buddhism to spread throughout his empire, but Ashoka sent missionaries to nearby countries in the hope that the religion would spread even further. His missionaries are probably the main reason that the faith was spread into Southeast Asia and his own son, Mahinda, travelled to what is now Sri Lanka and developed the religion there. Ashoka not only spread the religion but also spread its reputation and made it known to be a peaceful and accepting religion. He encouraged people to accept other's religions and also promoted non-violence. However the spread of the policies of peace may be responsible for the collapse of the Mauryan Dynasty. Ashoka was no longer interested in conquering to develop his kingdom, but was only concerned with the spread of Buddhism and others may have taken advantage of his peaceful nature, leading to the downfall of the empire his father and grandfather had built. Ashoka made great contributions to the early development relating to the Sangha. He saw it as his duty to support the Sangha, while also nurturing all religious traditions in his realm. He strengthened the monastic community by giving land, food and money to the Buddhist Sangha; the pillar edicts also mention gifts to the Sangha. ...read more.

He emphasised the way people should be acting, for example not harming living things. He led by example, a few of the many things he did include not eating meat, not committing animal sacrifices and replacing the royal hunt with the royal pilgrimage. As well as pilgrimages, worship was also encouraged by Ashoka by the building of many Stupas containing relics of the Buddha. These became local centres of worship and encouraged devotion to the Buddha. People could also use these centres as places where they can meditate while using statues of the Buddha to guide them. Ashoka promoted Buddhism as a peaceful religion. He emphasised the fact that it accepts all other religions which led to Buddhism being known as a tolerant and non-violent religion. This probably increased people's desire to join the faith. Although many positive things came out of Ashoka's promotion of Buddhism, there are also some negative points which must be taken into consideration. Ashoka interpreted the Dharma broadly in order to make it accessible to everyone. This meant that some distinct teachings were 'watered down'. His main emphasis was on maintaining good ethics in order to ensure that you will have a good rebirth, meditation was not stressed as a means of gaining higher states of consciousness to eventually attain enlightenment. Penny Williams 13S ...read more.