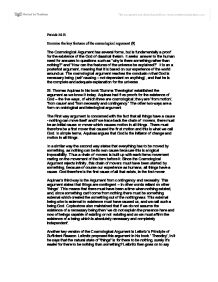 Examine the key features of the cosmological argument

Patrick M-B Examine the key features of the cosmological argument (9) The Cosmological Argument has several forms, but is fundamentally a proof for the existence of the God of classical theism. It seeks answer to the human need for answers to questions such as "why is there something rather than nothing?" and "How can the features of the universe be explained?" It is an a posteriori argument, meaning that it is based on our experience of the world around us. The cosmological argument reaches the conclusion that God is necessary being (self causing - not dependant on anything), and that he is the complete and adequate explanation for the universe. St. ...read more.

In a similar way the second way states that everything has to be moved by something, as nothing can be its own cause because this is a logical impossibility. Thus a chain of movers is built up with each items movement resting on the movement of the item before it. Since the Cosmological Argument rejects infinity, this chain of movers must have been started by something, because of course our experience as humans, all things have a cause. God therefore is the first cause of all that exists, ie the first mover. Aquinas's third way is the Argument from contingency and necessity. This argument states that things are contingent - in other words reliant on other 'things'. ...read more.

Leibnitz then goes on to say that nothing can't turn itself into something (since by the very nature of nothing it has no ability to cause itself to change), and our very existence shows that nothing did turn into something, there must have been some external force which caused it to do so. The final key version of the Cosmological Argument comes from Richard Swinburne. Swinburne says that God is quite simply the easiest explanation for everything. He bases his ideas on the fact that if a single sufficient explanation for can be found, then there is no gain in exploring other more complex explanations. Swinburne expresses this in the following quote: "if we can explain the many bits of the universe by one simple being which keeps them in existence, we should do so even if we cannot explain the existence of that simple being." ...read more.