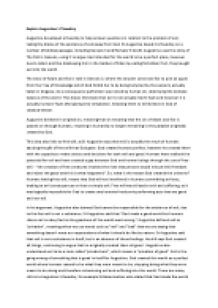 ﻿Explain Augustine?s Theodicy Augustine developed a theodicy to help answer questions in relation to the problem of evil, taking the blame of the existence of evil away from God. St Augustine based his theodicy on a number of biblical passages, including Genesis 3 and Romans 5:12-20. Augustine uses the story of The Fall in Genesis, using it to argue God intended for the world to be a perfect place, however due to Adam and Eve disobeying him in the Garden of Eden by eating forbidden fruit, they bought evil into the world. The story of Adam and Eve is told in Genesis 3, where the serpent convinces Eve to pick an apple from the Tree of Knowledge which God forbid her to by being tempted by the serpent; actually Satan in disguise. As a consequence perfection was ruined by human sin, destroying the delicate balance of the world. This shows Christians that evil is not actually God's fault and however it is actually humans' fault after giving into temptation. Allowing them to still believe in God of classical theism. Augustine believed in original sin, meaning that sin meaning that the sin of Adam and Eve is passed on through humans, resulting in humanity no longer remaining in the paradise originally created by God. ...read more.

God created this world as a perfect world where humans ceased to be what they were meant to be, stopping doing what they were meant to be doing and therefore introducing evil and suffering into this world. There are many critics to Augustine?s theodicy, for example Schleiermacher who stated that God made the world go wrong and the world was not even created perfect in the first place, so God is to blame for the problem of evil. When it comes to the presence of evil and sin in both the heavens and earth, God, although an omniscient, omnipotent, all good and all loving being, is innocent, with sin and evil occurring due to a result of freedom for humanity and angels allowing them to make their own decisions. There are many strengths to Augustine?s theodicy including the argument that evil is a privation of good, rather than a substance has been supported by numerous people, such as Brian Davies describing evil as a gap between what there is and what there ought to be. Also, Augustin's argument that the problem has come about due to humans wrongly using free has also been supported by a number of modern thinkers. ...read more.

The question raised is would a loving God allow even those who have rejected him to suffer in Hell and have eternal suffering for forever. Although Augustine agrees with God, some argue that overemphasising justice presents God as lacking in compassion in love. Other weaknesses include, how Augustine's theory is challenged by evolutionary theory. When God made the world it was perfect, according to Augustine and Augustine assumes, as stated in Genesis, the world was created in 6 days and Augustine also argues the world was damaged by humans using there free will wrongly, however the evolutionary theory, contradicts this is idea, as the evolutionary theory says, that the world has developed from an earlier stage of chaos, rather than being originally perfect and that certain innate and selfish desires, such as the desire for survival, although negative in the story of the fall are both essential and positive within the evolutionary framework. Also, another scientific error is Augustine's theodicy is challenged by biology. St Augustine has the idea, that humanity since Adam has inherited his sin, however biology goes against this idea that a disposition for something like sin can be inherited in such a way. Therefore human cannot be guilty for Adam's sin, meaning God that God is not a 'just' God by allowing humans to suffer for someone else's sin. ...read more.