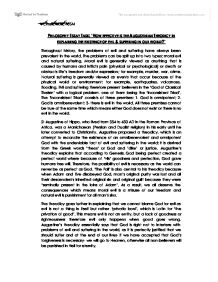 HOW EFFECTIVE IS THE AUGUSTINIAN THEODICY IN EXPLAINING THE EXISTENCE OF EVIL &amp; SUFFERING IN OUR WORLD?

PHILOSOPHY ESSAY TASK: 'HOW EFFECTIVE IS THE AUGUSTINIAN THEODICY IN EXPLAINING THE EXISTENCE OF EVIL & SUFFERING IN OUR WORLD?' Throughout history, the problems of evil and suffering have always been prevalent in the world. The problems can be split up into two types: moral evil and natural suffering. Moral evil is generally viewed as anything that is caused by humans and inflicts pain (physical or psychological) or death or obstructs life's freedom and/or expression; for example, murder, war, crime. Natural suffering is generally viewed as events that occur because of the physical world or environment; for example, earthquakes, volcanoes, flooding. Evil and suffering therefore present believers in the 'God of Classical Theism' with a logical problem- one of them being the 'Inconsistent Triad'. The 'Inconsistent Triad' consists of three premises: 1- God is omnipotent; 2- God is omnibenevolent; 3- there is evil in the world. All three premises cannot be true at the same time which means either God does not exist or there is no evil in the world. ...read more.

Augustine's theodicy essentially says that God is right not to interfere with problems of evil and suffering in the world, as it is perfectly justified that we should suffer and at the end of our lives- if we have accepted that God's forgiveness is necessary- we will go to Heaven, otherwise all non-believers will be punished in Hell for eternity. For some Christians- mainly fundamental Christians- Augustine's theodicy succeeds in justifying evil and suffering in the world. However, for non-Christians and even liberal Christians, the theodicy fails for a number of different reasons. The theodicy fails in some ways because of the advance in science. Augustine's theodicy is based on the Bible being interpreted as literal which opens him up to two scientific criticisms. In contrast to evolution theory, which is now widely accepted as an explanation for the existence of complex organisms through the gradual process of natural selection and random mutations over generations, if the Bible is taken as literal truth, then the theodicy is the reverse of evolution as it prescribes humans were created first. ...read more.

Not only that, the selection process for Heaven is discriminate as Heaven can be viewed as an exclusive club for people who have turned to Christ and accepted the need for God's forgiveness. Therefore, God is wasteful of good souls as they would be punished eternally for having no Christian belief- even if they had been morally good people their whole lives. This clearly questions God's omnibenevolence and fairness. At first evaluation, St Augustine's theodicy appears to make some good points about the reasons for evil and suffering in the world, particularly his comparison of evil to darkness and them being an absence of good and light respectively. However on closer inspection, there are some clear flaws with the theodicy which challenge the 'God of Classical Theism' as they criticise 'His' creation and more importantly- God's omnibenevolence. The theodicy works well for fundamental Christians, but is not effective in convincing other Christians and non-Christians into the reasons for the existence of evil and suffering in the world as it presents us with an arbitrary and flawed God. ?? ?? ?? ?? Pamela Bolla 13SM ...read more.