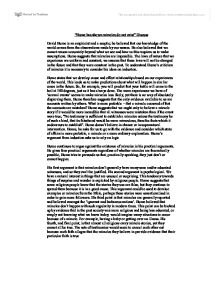 Hume has shown miracles do not exist

"Hume has shown miracles do not exist" Discuss David Hume is an empiricist and a sceptic; he believed that our knowledge of the world comes from the observations made by our senses. He also believed that we cannot reason accurately beyond what we see and hear as this requires us to make assumptions. Hume suggests that miracles are impossible. The laws of nature that we experience are uniform and constant; we assume that these laws will not be changed in the future and that they were constant in the past. To understand Hume's criticism of miracles it is necessary to consider his ideas on induction. Hume states that we develop cause and effect relationships based on our experiences of the world. This leads us to make predictions about what will happen in similar cases in the future. So, for example, you will predict that your kettle will come to the boil at 100 degrees, just as it has always done. ...read more.

This argument could be used to devalue examples or miracles from the Bible, perhaps these stories were sensationalised in order to gain more followers. His third point is that miracles are generally reported and believed amongst the 'ignorant and barbarous nations'. Hume believed that miracles don't happen with such regularity in modern times. This point can be backed up by evidence that in the past society was more religious and being less educated, or simply not knowing what we know today, would imagine many situations to occur because of a miracle. For example, having a baby or getting over an illness. His fourth, and final point, is that almost all religions carry miracle stories, yet they cannot all be true. The sets of testimonies would seem to cancel each other out because each faith alleges that the miracles they believe in provide evidence that their particular faith is true However, there are various arguments against Hume's rejection of the existence of miracles. ...read more.

John Polkinghorne defends the possibility of miracles and states that all science can tell us is that a given event is against normal expectations; it cannot completely disprove its happening. The laws of nature do not change yet the consequences of these laws can change when one moves into a 'new regime'. Consequences of the laws of nature may change if God begins to deal with humans in a new way. The resurrection of Jesus is a crucial miracle as it beings a new age in God's dealing with people. In conclusion, although Hume's arguments are perhaps more realistic than that of fundamental Christians such as Richard Swinburne and John Polkinghorne I find it very hard for miracles to be either proved or disproved entirely. The whole idea of a miracle is that it is a miraculous event which cannot be explained nor predicted, so although David Hume does well to make the idea of a miracle not existing likely he faces an impossible task in rendering Miracles impossible. By Dom Ansell 6PWL ...read more.