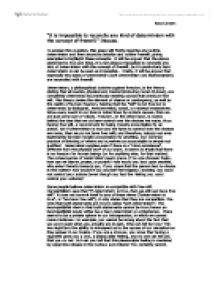 &quot;It is impossible to reconcile any kind of determinism with the concept of freewill.&quot; Discuss.

"It is impossible to reconcile any kind of determinism with the concept of freewill." Discuss. To answer this question, this essay will firstly describe and outline determinism and then secondly describe and outline freewill, giving examples to highlight these concepts. It will be argued that the above statement is true and false, it is not always impossible to reconcile any kind of determinism with the concept of freewill, but in particularly hard determinism is can be seen as impossible. Finally, it will be argued that especially two types of determinism (soft determinism and libertarianism) are reconciled with freewill. Determinism, a philosophical doctrine against freedom, is the theory stating that all events, physical and mental (including moral choices), are completely determined by previously existing causes that preclude free will. This theory denies the element of chance or contingency, as well as the reality of human freedom, holding that the "will" is not free but is determined by biological, environmental, social, or mystical imperatives. Since every event in our lives is determined by outside causes, then we are just some sort of robots. Freedom, on the other hand, is rooted behind the idea that we do have control over the choices we make, thus having free will, a requirement for being morally accountable for an action. But if determinism is true and we have no control over the choices we make, then we do not have free-will; and therefore, nobody can ever legitimately be held morally accountable for anything. ...read more.

A socio-economic disadvantaged child, raised by an inadequate parent, attending an under funded urban school, in a neighbourhood with few job opportunities has many fewer choices than does a child born into the upper class with all the benefits and privileges such standing accords. However, many kids in a disadvantaged neighbourhood will choose not to join gangs or become involved in delinquent behaviour. Many will create better lives for themselves and their children. If one adopts a soft determinist approach one believes some aspects of human beings are determined, but we are also morally responsible for our actions. Soft determinism doesn't rule out free will, the freedom to act is acting voluntarily and not out of coercion. Soft determinists are criticised by hard determinists for failing to realise the extent to which human freedom is limited, and by libertarians for failing to realise the degree of human freedom that exists. Soft determinists have not yet agreed on precisely what is and what isn't a determining factor in human action so it can become somewhat confusing. Consequently, soft determinists would say that the statement "It is impossible to reconcile any kind of determinism with the concept of freewill" is false as they believe they are partially free as they have the freedom to act but also know they are restricted to the choices they are able to make due to being deficient in some understanding. If one takes a libertarian approach, one believes we are free and morally responsible for our actions as human beings have self-determination or freedom to act. ...read more.

Euthanasia is a massive dilemma as it is against the law in the UK, and any doctor who helps a terminally ill adult to die is open to a charge of murder. Thus doctors do not have the ability to assist terminally ill patients in their 'freewill' decision. I believe adults should have the freedom to make such choices in life, such as euthanasia, although I am aware of the reality that it will never be as simple. To finally conclude, in this essay I have outlined that it is possible to reconcile two kinds of determinism with the concept of freewill, soft determinism and libertarianism. This is because, on the whole they take into account the authenticity that humans do have the freedom to make their own decisions in their lives. However some soft determinists and libertarians are not confident as to how much freedom they have. They do not know to what extent they can use the concept of freewill. Alternatively some Christians may believe that God has already planned out their lives. He knows what will happen next and what choices they will make whether it is what top to wear or whether or not to have an abortion. This hard deterministic approach means that Christians may not believe in freewill as their lives are predetermined, not allowing them to make their own choices. This is not believed by all Christians though, and non-Christians may also agree with this hard deterministic approach. Rosa Lenders ...read more.