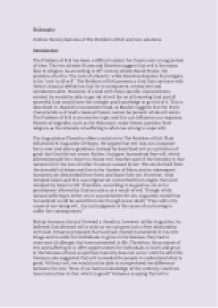 ﻿Philosophy Outline the key features of The Problem of Evil and two solutions Introduction The Problem of Evil has been a difficult subject for theists over a long period of time. The two atheists Hume and Dawkins suggest that evil is the major flaw in religion. As according to 18th century atheist David Hume, the problem of evil is ?the rock of atheism?, while Dawkins disputes that religion is the ?root to all evil?. The Problem of Evil presents a God that contrasts with theist?s classical definition, that he is omnipotent, omniscient and omnibenevolent. However, if a God with these specific characteristics existed, he would be able to get rid of evil, for an all knowing God and all powerful God would have the strength and knowledge to get rid of it. This is described J.L. Mackie?s inconsistent triad, as Mackie suggests that the three characteristics of God?s classical theism cannot be present while evil exists. The Problem of Evil is an emotive topic and this can influence our response. ...read more.

Irenaeus also suggested that evil is needed for people to understand what is good. Without evil, we would not be able to comprehend the difference between the two. "How, if we had no knowledge of the contrary, could we have instruction in that, which is good?" Irenaeus is saying that evil is necessary in order for individuals to appreciate good. Some goods are only possible in the face of evil, such as suffering, which enables us to forgive our enemies. Sometimes adversity helps to push things along, other times it doesn?t. If we didn?t have these problems, it?s a possibility we wouldn?t be rising to them as we are. Hick developed the Irenaean theodicy further by describing the world as a ?vale of soul making? a description that he borrowed from Keats. He stated that we are purposely created at an epistemic distance from God, as this is the only way we can be free. If everyone had knowledge of God, no one would have free choice because they would be compelled to follow his commandments. ...read more.

Pain then becomes an important tool for our betterment in the hands of an all-seeing God of eternity. C.S Lewis replies by suggesting that the best possible universe should not be one where everyone is forced to be perfect, but rather one with free will that allows humans to grow and develop, strengthening their faith. To conclude, I think the Problem of Evil cannot be solved. The reason for this is because humankind is not powerful enough to defeat natural evil. Although individuals can intervene with moral evil by sharing empathy amongst others and caring for them when they suffer, we cannot prevent natural disasters or unexpected deaths. This is the price we must pay to live a life of free will, as freedom brings disadvantages. To this extent, evil cannot be solved. However, the suffering of war and human sin can be prevented to a certain extent if people were to consider the consequences of their actions and turn their attention to society, rather than themselves. But even this cannot be pursued fully as the whole purpose of free will is that people cannot be controlled, therefore we cannot force people to think or act in certain ways. ...read more.