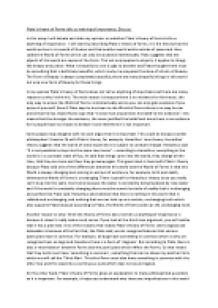 Platos theory of Forms tells us nothing of importance. Discuss.

Transfer-Encoding: chunked ﻿Plato?s theory of Forms tells us nothing of importance. Discuss. In this essay I will debate and state my opinion on whether Plato?s theory of forms tells us anything of importance. I will start by describing Plato?s theory of forms, it is the theory that the world we live in is a world of illusion and that another world exists outside of space and time, called the World of Forms which can only be accessed intellectually. Plato suggests that the objects of this world are copies of the Form. This not only applies to objects, it applies to things like beauty and justice. What is beautiful to one is ugly to another and Plato thought there must be something that is definitely beautiful, which is why he proposed the idea of a Form of Beauty. The Form of Beauty is always completely beautiful; there are many beautiful things in this world but only one Form of Beauty for those things. ...read more.

Heraclitus? theory suggests that the world of sense experience is subject to constant change. Heraclitus said ?It is not possible to step into the same river twice? ? according to Heraclitus, everything in the world is in a constant state of flux, he said that things come into the world, they change all the time, that they are here and then they go away again. This goes hand in hand with Plato?s theory because Plato said one of the differences between this world and the World of Forms is that this World is always changing and coming in and out of existence, for example, birth and death, whereas the World of Forms is unchanging. There is proof for Heraclitus? theory since you really can?t step into the same river twice because the water is constantly being replaced by new water and if the world is constantly changing there must be a world outside of reality that is unchanging and perfect like Plato said. ...read more.

So that means that they both must have ?something in common?, something that can be shown by another Form which we will call the ?Third Man?. This third Form must also have something in common with the other two and this would be a continuous cycle which does not sound logical. On the other hand, Plato?s theory of Forms gives an explanation to many philosophical questions so it is important. For example, it helps you understand why there are imperfections in this world such as death. There are imperfections in this world because only the realm of Forms is perfect. But I find this hard to understand because how can there be perfect Forms of things like death? In conclusion, I do not think the theory of Forms is important because although it does answer many philosophical questions and there are other philosophical theories from different philosophers which support Plato?s beliefs, there are things which I find illogical and most importantly there is no way to prove it. ...read more.