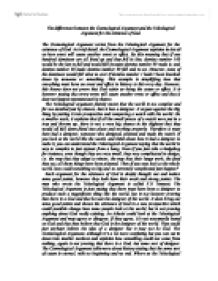 Even if you just take a hedgehog for instance, even though they are very small, they very complicated in design, i.e. the way that they adapt to winter, the way that their lungs work, the food they eat, all these things have been planned. Then if you next look at the whole world, how could something so big and so extremely complicated just happen? Each argument for the existence of God is deeply thought out and makes some good points, however they both have their weak and strong points. The man who wrote the Teleological Argument is called F.R Tennant. The Teleological Argument is just stating that there must have been a designer to produce such a magnificent thing like the world, but is not however proving that there is a God and that he was the designer of the world. ...read more.

Where as the Teleological Argument doesn't speak of the past or future but just simply says that the universe is designed in such a way that life evolved into existence. In conclusion, both arguments are different and may or may not convince an Atheist that there is a God. There are so many arguments, which develop over the years trying to prove there is an existing God but who's to say which one is right? Some may be more believable than others may but there are always two sides to every story. You could take the Teleological Argument for instance and say how can you compare something like a watch, which we know has a designer to something as huge as the universe. Just because something is complicated and fits like a watch, which was obviously thought through and designed by someone, doesn't prove that the same thing happened in the world. ...read more.