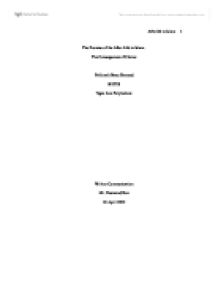 The Promise of the After-Life in Islam

Judgement Day: Accounting for one's deeds With resurrection comes Judgement Day which emphasizes on the Qur'an's tenacious stress on the "ultimate moral responsibility and accountability of each believer" (Esposito, 1998, p. 30). Mankind will be led in groups naked to an "uninterrupted plain devoid of any irregularity" where none can escape Allah's vision (Al-Ghazali, 1995, p. 177). The blazing sun will make the tightly packed congregation perspire in the sweltering heat according to their sins to atone for the duties they failed to perform. Supporting information in a study by Muslim, he says "some will have sweat up to their ankles . . . and others will have it up to their mouths" (cited in Sakr, 2001, p. 90). The intensity of a sinner's suffering will be so unbearable that he will request to be sent to hell rather than undergo this torture. The concept of punishment is imminently significant in Islam. All will stand before Him in humility and be answerable for their deeds. Each will be issued his "Book of Records" which chronicles all his actions and intentions and this book is testament to how he led his life. A righteous person will receive the book in his right hand to indicate that Allah is pleased with him. A sinner will receive it in his left hand (Sakr, 2001, p. 101). Everyone is then interrogated about the way they lived. There is no "intercession", "prejudice" nor "favoritism" in the judgement (p. 97). In two different works (Hamid, 1996; Sakr, 2001), it is said that nobody can hide their misdeeds since their own "biological organs" testify against them. ...read more.

190). The studies of both Hamid and Malik show that there are different categories of heaven. Malik concedes there are seven heavens. "The seventh heaven [is] [t]he Garden of Firdaws - Jannat al Firdaws" (2002, par. 21). Al-Ghazali describes heaven as a beautiful garden where souls "rejoice, eating of its various foods, and quaffing its milk, wine and honey from rivers whose beds are of silver, whose pebbles are pearls . . . " (1995, p. 233). Just as sinners are tormented according to their varying degrees of sins, the blessed are rewarded according to their righteousness and resolute faith. As the seventh heaven is the closest to Allah and His infinite love, it is the ultimate recompense for leading a life in total submission and of unadulterated love for Him. This will be the paramount motivation to "[walk] in the path of [Allah]" (Coward, 1997, p.51). VI. The consequence of choice Man shapes his hereafter based on his positive and negative deeds in this life, so he should always be devoted to Allah in order to stay on His path. Lari says "whenever man falls into the pit of sin, he should immediately feel polluted by his act of rebellion against God" and reform before he gets "the stamp of perdition" (1992, p.167). Man's actions shall be weighed in Scales and a final consignment to Heaven or Hell shall be decreed . . . For the Godfearing shall be a triumph-gardens and vineyards, maidens for companions, and a cup overflowing. But man is not to forget that Hell lurks in ambush, a home for the profligate, where they shall abide for ages . . . (Winter, 1995, p. xiii) (2700 words) VI. ...read more.