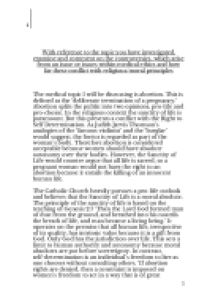 With reference to the topic of abortion , examine and comment on the controversies, which arise from an issue or issues within medical ethics and how far these conflict with religious/moral principles

﻿With reference to the topic you have investigated, examine and comment on the controversies, which arise from an issue or issues within medical ethics and how far these conflict with religious/moral principles The medical topic I will be discussing is abortion. This is defined as the ?deliberate termination of a pregnancy.? Abortion splits the public into two opinions, pro-life and pro-choice. In the religious context the sanctity of life is paramount. But this presents a conflict with the Right to Self Determination. As Judith Jarvis Thomson?s analogies of the ?famous violinist? and the ?burglar? would suggest, the foetus is regarded as part of the woman?s body. Therefore abortion is considered acceptable because women should have absolute autonomy over their bodies. However, the Sanctity of Life would counter argue that all life is sacred, so a pregnant woman would not have the right to an abortion because it entails the killing of an innocent human life. The Catholic Church heavily pursues a pro-life outlook and believes that the Sanctity of Life is a moral absolute. The principle of the sanctity of life is based on the teaching of Genesis 2:7 ?Then the Lord God formed man of dust from the ground, and breathed into his nostrils the breath of life, and man became a living being.? It operates on the premise that all human life, irrespective of its quality, has intrinsic value because it is a gift from God. Only God has the jurisdiction over life. This sets a limit to human authority and autonomy because moral absolutes are put before sovereignty. In contrast, self-determination is an individual?s freedom to live as one chooses without consulting others. ?If abortion rights are denied, then a constraint is imposed on women?s freedom to act in a way that is of great importance to them, both for its own sake and for the sake of their achievement of equality;? Here Judith Jarvis Thomson is saying the dismissal of abortion rights impacts a woman?s rights to equality. ...read more.

?If there is harm then you shall pay life for life, eye for eye, tooth for tooth, hand for hand, foot for foot, burn for burn, wound for wound, stripe for stripe.? (Exodus 21) So, the value of the foetus is in question if we assume life begins at a later stage. Being a potential person allows the foetus the right to life from the earliest stage of development, the moment when the egg is fertilised. But even if the foetus has an inherent right to life, the mother?s right to her autonomy supersedes their right. On the other hand, nobody has an unconstrained right to autonomy. A parent?s responsibility for their children lasts 18 years because parental bodies remain the means by which parents care for and protect their children. A potential person?s life is still of intrinsic value. The sanctity of life declares that all life is valuable and a gift of God, so irrespective of the condition of that life or its quality; it must always be valued and respected because God is the only one who has jurisdiction over life. ?Then the Lord God formed man of dust from the ground, and breathed into his nostrils the breath of life, and the man became a living being.? (Genesis 2:7) One of the attributes of being a human being is being able to sense and feel pain. The key thing that Warnock established is that one of the relational factors of when we become protected by the law is when we sense and feel pain. One of the implications of the law is that at 14 days there is a change in the status of the embryo, it ceases to be fetal material and becomes an embryo therefore you cannot conduct research on it. A biological factor was picked because it was decided that the relational factor, whether the foetus is able to feel pain, determines whether you are a human or not. ...read more.

Sanctity of Life would say that all life is sacred, irrespective of its quality. To conclude, there two main ethical issues that surround the medical procedure of abortion. The first one is whether the foetus is a person, and if so at what point in its development does it gain personhood? Another ethical issue is if the mother has the right to terminate her pregnancy, who?s rights are higher? The mother or the fetuses?? If the foetus is a person, then strong sanctity of life opposes abortion because it would involve the termination of a valuable life. However, if the foetus is not a person until after twenty-four weeks or birth, then abortion is not considered the termination of a valuable life providing it is done before twenty-four weeks. There is no consensus on society about how to address this issue; the public remains sharply divided over the topic of abortion. Religious and moral principles influence the opinion of many people, for example Roman Catholics believe that abortion is murder. This is because passages in the Bible suggest that life begins at conception and the foetus is a person throughout the pregnancy. However, although the Church of England disagrees with abortion, they permit it under certain circumstances because they understand that conflicts in life may force the mother to choose the medical procedure. A similar opinion of the Methodist Church believes that God would want Christians to be compassionate with one another. Therefore, allowing abortion to a woman who is in challenging situation would be the compassionate act to make. In my opinion, to determine whether abortion is right or wrong would require an evaluation of the circumstances that surrounded that particular case. If a woman?s life is in danger and an abortion is the only solution, then I believe on these terms abortion is allowed. But if the woman requests an abortion because she has been raped, I believe that the foetus should not be punished for its father?s crimes and its life is too valuable to be terminated. ...read more.