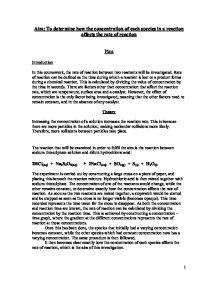 Aim: To determine how the concentration of each species in a reaction affects the rate of reaction

This enables accurate results to be produced, and both an accurate and reliable conclusion to be drawn. The following methods are going to be used in order to ensure a fair test: * Using only one variable per test e.g. changing the concentration of sodium thiosulphate but keeping the concentration of hydrochloric acid constant - this enables an accurate conclusion to be drawn * Glassware containing the solution will be washed both before use and after measurements - this ensures that results do not become damaged by eliminating ions from the previous trials * Three trials will be undertaken for each mixture - this enables an accurate average time to be calculated, which reduces the effect of any anomalous results * Using separate glassware for different reactants - this ensures that the reactants aren't mistakenly mixed together which would produce flawed results * Resetting the stopwatch after each use - prevents accidentally writing down the incorrect time after the cross disappears * Keeping the total volume of the solution at 75cm3 as different volumes could produce different results * Starting the stopwatch as soon as the reactants are in the beaker Producing different concentrations In order to determine how each species affects the reaction rate, the concentration of each species needs to be changed, making this a variable. This is achieved by altering the volume of each reactant. However, to accurately determine the effects of concentration, only one reactant can be a variable at a time. By not doing this, the concentrations of both Na2S2O3 and HCl are variables, then their effects can not be determined, as it becomes difficult to distinguish between the two variables. Therefore, in the experiments, the following concentrations will be used, by use of the following volumes: Experiment 1 Total volume = 75 cm3 In Experiment 1, the concentration of Na2S2O3 is constant, while the concentration of HCl is the independent variable. Starting concentration of HCl = 2 mol dm-3 Concentration of HCl (mol dm-3) Volume of HCl (cm3) ...read more.

one person would be in charge of determining when the cross disappears Foreign ions damaging the results One person would be in charge of washing apparatus after use Temperature could have affected the results as it is not controlled Carry out all of the experiments on the same day to ensure constant conditions i.e. room temperature Errors in measurement Errors in measurement Modification to method Producing accurate and correct times from the stopwatch Ensure that the stopwatch functions properly, reset the stopwatch before use, slowly copy the time on the stopwatch after the reaction is complete and then compare the time written down with the time on the stopwatch Using accurate volumes of the reactants Slowly measure the amount of reactant that is required, take the meniscus into account as the starting point, crouch down for a view from table level to ensure the correct volume and ensure this is poured directly into the reaction beaker and not onto the sides of the beaker The main source of error in my investigation was obviously measuring the time taken for the cross to disappear. I found it difficult trying to start the stopwatch immediately after the reactants were mixed. Also, it was surprisingly a challenge to determine when the cross had completely disappeared as in some cases a small part of the cross was still visible from some angles. Although I feel that measurements taken have been quite accurate, these factors clearly affected the accuracy of my results. In order to reduce the effect of all these errors, I would do the following if repeating this experiment: * Have five trials instead of three - in order to produce more accurate average times * Use different beakers for the reaction mixture if there was a greater amount of equipment available - in order to avoid effect of foreign ions * Extensive cleaning of apparatus before use - the apparatus could have been contaminated before use which would produce inaccurate results ?? ?? ?? ?? 1 ...read more.