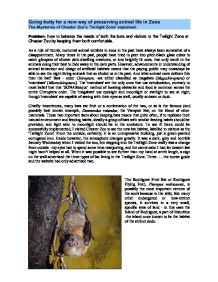 Going batty for a new way of preserving animal life in Zoos The Mysteries of Chester Zoo's 'Twilight Zone' explained. Problem: how to balance the needs of both the bats and visitors to the Twilight Zone at Chester Zoo by keeping them both comfortable. As a rule of thumb, nocturnal animal exhibits in zoos in the past have always been somewhat of a disappointment. Many times in the past, people have tried to peer into pitch-black glass cubes to catch glimpses of elusive dark-dwelling creatures, or into brightly lit ones, that only result in the animals doing their best to hide away in the dark parts. However, advancements in understanding of animal behaviour and design of artificial habitats means that the paying public may nowadays be able to see the night-living animals that so eluded us in the past. And what animal more defines this than the bat? Bats - order Chiroptera -are either classified as megabats (Megachiroptera) or 'microbats' (Microchiroptera). The 'microbats' are the only ones that use echolocation, contrary to most belief that this 'SONAResque' method of locating obstacles and food is common across the entire Chiroptera order. The 'megabats' use eyesight and moonlight or starlight to see at night, though 'microbats' are capable of seeing with their eyes as well, usually at dawn or dusk. Chiefly insectivores, many bats eat fruit or a combination of the two, or as is the famous (and possibly best known example, Desmondus rotundus, the Vampire Bat, on the blood of other mammals. These two important facts about keeping bats means that quite often, if to replicate their natural environment and feeding habits, ideally a group of bats with similar feeding habits should be provided, and light akin to moonlight should be in the enclosure. ...read more.

Daylight bulbs are used rather than traditional filament or argon strip lighting during the 'daylight hours' so as not to confuse the bats should they be approached with real sunlight, though at that time they would normally he roosting. The normal day light routine is reversed for the bats, so the visitors to the zoo manage to see the bats when they're active. Staff on duty in the Twilight Zone use red light in their torches to examine the bats even during the 'night' time. This is because bats are unable to see red as well as humans are and the light will not damage their eyes so much. According to the zoo staff, any of the bats in the Twilight Zone could be released into the wild with no problems about adapting, as bats rarely venture much further from their roosting caves than the length of the Twilight Zone. Often, the plants bearing the animals' preferred fruit will grow in greater abundance close to the caves, as the bats choose to fly short distances, and the fruits that grow closer to the caves have a higher chance of having their seeds placed in a similarly close radius. Bat faeces, known as guano, are very vitamin rich and provide an excellent fertiliser, so where bats hunt most is where plant life is most likely to grow. (Another useful aspect of guano, as this reporter found out, that should it get on clothes, it is relatively easy to remove by simple machine washing.) This is a clear indicator that the Twilight Zone has done well in replicating the natural environment of the three bats - signs of stress on an animal, such as repeated circling, or staring into middle distance, were not detected ...read more.

So, begging the question, why not continue this idea on with more animals? Though there is a risk of people who do not respect the animals visiting the enclosures, why not start walkways through the flamingo enclosures? Swim tanks with the penguins and other safe water life? Many animals wouldn't dare hurt a human, (like the little fruit bats) so why keep them at more than arm's reach? Sources and reliability: Much of the information garnered for this report came directly from the keepers at Chester Zoo, particularly the information concerning bat dimensions in the wild and what food is fed to them. Some information was found through simple observation of the bat behaviour in the Twilight Zone, or looking at the surroundings. Both of these were cross-referenced against the University of Michigan's zoology pages, which have been a very concise and interesting form of information. (Some other links provided may be from this following site) http://animaldiversity.ummz.umich.edu/site/index.html Information about the Rodriguez Bat came from the following two sites, compared against each other; they are marked with a 1. http://www.thewildones.org/animals/rodbat.html http://animaldiversity.ummz.umich.edu/site/accounts/information/Pteropus_rodricensis.html Information concerning the Seba's bats, and all marked with a little 2 are from the zoo keepers, cross-referenced with following two sites: http://www.batcon.org/batsmag/v19n4-04.html http://animaldiversity.ummz.umich.edu/site/accounts/information/Carollia perspicillata.html Information marked with a small 3 concerns the Livingstone's bat, information sources included: http://www.animalinfo.org/species/bat/pterlivi.htm http://animaldiversity.ummz.umich.edu/site/accounts/information/Pteropus livingstonii.html Encyclopaedia Britannica (15th edition, volume 11, p527) was consulted for information on the Tamarind fruit and an additional website was used to cross-check this information is included here (Marked in the text with a 4): http://www.crfg.org/pubs/ff/tamarind.html This report was written to the sound of Golden Earring's 'Twilight Zone', Avenged Sevenfold's 'Bat Country', Meat Loafs 'Bat Out Of Hell: The Lost prophets' 'Everyday Combat' and of course, Genesis' 'Robbery, Assault and Battery ' to stay in the mood. Some illustrations have been removed for copyright reasons. ...read more.