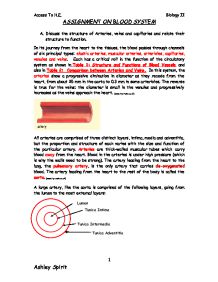 A. Discuss the structure of Arteries, veins and capillaries and relate their structure to function. In its journey from the heart to the tissues, the blood passes through channels of six principal types: elastic arteries, muscular arteries, arterioles, capillaries, venules and veins. Each has a critical roll in the function of the circulatory system as shown in Table 1: Structure and Functions of Blood Vessels and also in Table 2: Comparison between Arteries and Veins. In this system, the arteries show a progressive diminution in diameter as they recede from the heart, from about 25 mm in the aorta to 0.3 mm in some arterioles. The reverse is true for the veins; the diameter is small in the venules and progressively increases as the veins approach the heart. (www.ivy-rose.co.uk) All arteries are comprised of three distinct layers, intima, media and adventitia, but the proportion and structure of each varies with the size and function of the particular artery. Arteries are thick-walled muscular tubes which carry blood away from the heart. Blood in the arteries is under high pressure (which is why the walls need to be strong). The artery leading from the heart to the lung, the pulmonary artery, is the only artery that carries de-oxygenated blood. The artery leading from the heart to the rest of the body is called the aorta. (www.ivy-rose.co.uk) A large artery, like the aorta is comprised of the following layers, going from the lumen to the most external layers: 1. The intima, or innermost layer, consists of a layer of endothelial cells separated from the inner layer by a narrow layer of connective tissues which anchors the cells to the arterial wall. 2. A large layer of elastic fibres forming the elastic internal layer. 3. Below this layer are concentric waves of smooth muscle cells intermixed with elastic fibres. Elastic lamellae and smooth muscle cells are imbedded in a ground substance rich in proteoglycans. ...read more.

Cardiac Systole describes the period at which the heart contracts and cardiac diastole describes the period of relaxation, between beats. They can however be further divided into diastole and systole of the atria and ventricles. (www.teachpe.com) The average heartbeat is 72 times per minute. In the course of one day it beats over 100,000 times. In one year the heart beats almost 38 million times, and by the time you are 70 years old, on average, it's made it to 2.5 billion beats. The electrical impulse leaves the SA node (1) and travels to the right and left atria, causing them to contract together. This takes .04 seconds. There is now a natural delay to allow the atria to contract and the ventricles to fill up with blood. The electrical impulse has now traveled to the atrioventricular node (AV node) (2). The electrical impulse now goes to the Bundle of His (3), then it divides into the right and left bundle branches (4) where it rapidly spreads using Purkinje fibers (5) to the muscles of the right and left ventricle, causing them to contract at the same time. Any of the electrical tissue in the heart has the ability to be a pacemaker. However, the SA node generates an electric impulse faster than the other tissue so it is normally in control. If the SA node should fail, the other parts of the electrical system can take over, although usually at a slower rate. (health.howstuffworks.com) although the pacemaker cells create the electrical impulse that causes the heart to beat, other nerves can change the rate at which the pacemaker cells fire and the how strongly the heart contracts. These nerves are part of the autonomic nervous system. The autonomic nervous system has two parts - The sympathetic nervous system and the parasympathetic nervous system. The sympathetic nerves increase the heart rate and increase the force of contraction. ...read more.

If you have iron overload, you may need iron chelation therapy. For this therapy, medicine is given through an injection or as a pill to remove the extra iron from your body. Lung Injury Although it's unlikely, blood transfusions can damage your lungs, making it difficult to breathe. This usually occurs within about 6 hours of the procedure. Most patients recover. However, 5 to 25 percent of patients who develop lung injuries die from the injury. These people usually were very ill before the transfusion. Doctors aren't completely sure why blood transfusions damage the lungs. Antibodies (proteins)-which are more likely to be found in the plasma of women who have been pregnant-may disrupt the normal way that lung cells work. Because of this risk, hospitals are starting to use men and women's plasma differently. Acute Immune Haemolytic Reaction Acute immune haemolytic reaction is very serious, but also very rare. It occurs if the blood type you get during a transfusion doesn't match or work with your blood type. Your body attacks the new red blood cells, which then produce substances that harm your kidneys. The symptoms include chills, fever, and nausea, pain in the chest or back, and dark urine. The doctor will stop the transfusion at the first sign of this reaction. Delayed Haemolytic Reaction This is a much slower version of acute immune haemolytic reaction. Your body destroys red blood cells so slowly that the problem can go unnoticed until your red blood cell level is very low. Both the acute and delayed haemolytic reactions are most common in patients who have had a previous transfusion. Graft-Versus-Host Disease Graft-versus-host disease (GVHD) is when white blood cells in the new blood attack your tissues. GVHD is usually fatal. People who have weakened immune systems are the most likely to get GVHD. Symptoms start within a month of the blood transfusion. They include fever, rash, and diarrhoea. To protect against GVHD, patients with weakened immune systems should receive blood that has been treated so the white blood cells can't cause GVHD. (www.nhlbi.nih. ...read more.