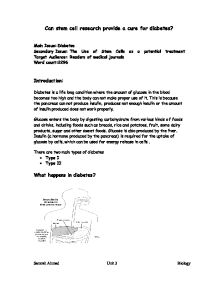 Diabetes is a life long condition where the amount of glucose in the blood becomes too high and the body can not make proper use of it. This is because the pancreas can not produce insulin, produces not enough insulin or the amount of insulin produced does not work properly.

Glucose enters the body by digesting carbohydrate from various kinds of foods and drinks, including foods such as breads, rice and potatoes, fruit, some dairy products, sugar and other sweet foods. Glucose is also produced by the liver. Insulin (a hormone produced by the pancreas) is required for the uptake of glucose by cells, which can be used for energy release in cells.

There are two main types of diabetes

What happens in diabetes? 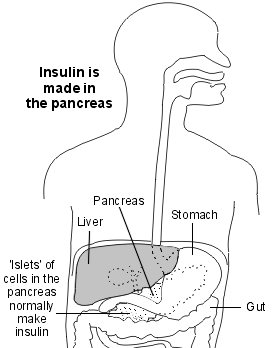 After we eat, various foods are broken down into sugars in the gut. The main sugar is called glucose. This is absorbed through the gut wall into the bloodstream.

When your blood glucose begins to rise (after eating), the level of insulin should also rise. Insulin acts on the cells of your body and makes them take glucose into the cells from the bloodstream. Some of the glucose is used by the cells for energy, and some is converted into glycogen or fat (which are stores of energy). When the blood glucose level begins to fall (between meals, or when we have no food), the level of insulin falls. Some glycogen or fat is then broken down back into glucose and some is released back into the bloodstream to keep the blood glucose level normal.

Hormones such as insulin are chemicals that are released into the bloodstream and have an action on certain parts of the body. Insulin is made by special cells called beta cells which are part of little 'islands' of cells (islets) within the pancreas.

Diabetes develops if you do not make enough insulin, or if the insulin that you do make does not work properly on the body's cells

The signs and symptoms of diabetes are:

Both type 1 and type 2 diabetes are preliminary inherited. Type 1 diabetes is also triggered by certain infections.

Type 2 diabetes can develop with a bad lifestyle. Increased amounts of saturated fats in diet can lead to obesity. 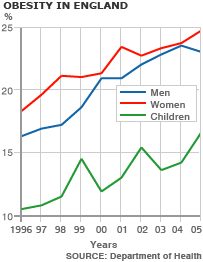 Obesity has been rising, as shown above, for the last decade, at least.Studies have shown that an increase in body fat is linked to glucose intolerance (type 2 diabetes) by suppressing the signals sent by insulin receptors (i.e. it is not telling the body it needs insulin).[1]

Of course, obesity is not the only cause of type 2 diabetes, but it really is a main contributor. There will still be those who develop diabetes because they have a genetic predisposition to it, even if they are healthy and active. The obesity epidemic should not only be tackled because of diabetes, but because it contributes to many other diseases or disadvantages, such as atherosceloris.

This leads the conclusion: that half of the problem of diabetes is caused by society itself. Having medication to help diabetes is great for those who are geneticaly predispositioned  to have diabetes, but everyone needs to make a conscious decision to become fitter and healthier. Only then will diabetes be less of a problem, it will become rarer and eventually much less expensive to maintain.

Treatments and potential cures for diabetes

The basic treatment for diabetes has been more or less the same for many years: insulin injections accompanied with glucose tests.

For type 1 diabetes, insulin (genetically engineered) is injected straight into the bloodstream. 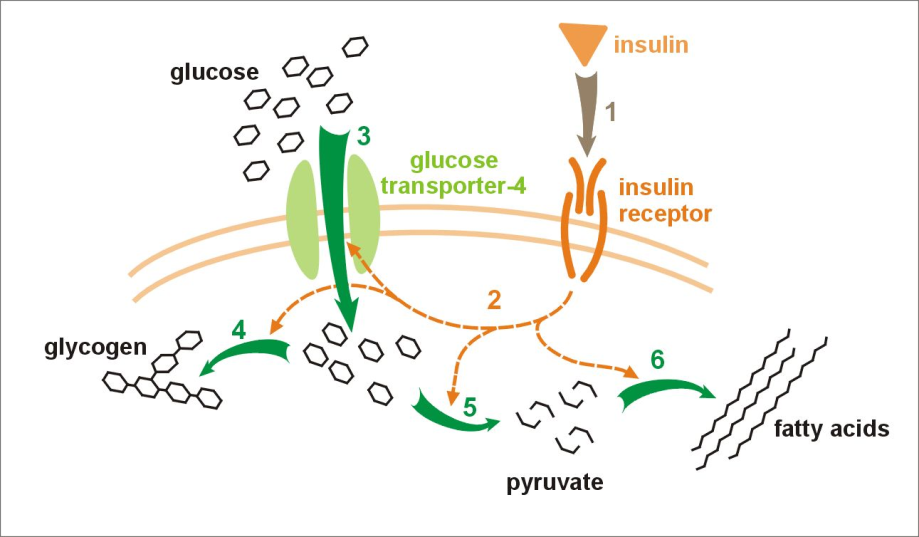 Insulin is a hormone. It “unlocks” the cells so that glucose can enter cells (muscle, tissue) from the bloodstream. It does this by binding onto insulin receptors, which then allow the glucose molecules to pass through to be metabolised with oxygen into carbon dioxide, water and energy. If there is no insulin, the “door stays locked” and the glucose remains in the bloodstream.

Insulin pumps is a relatively new treatment. The pump is represented by a small box which is strapped onto the body of the patient, a cannula (needle) is inserted underneath the skin to connect the pump to the bloodstream.

“The pump is not automatic, but is programmed to deliver insulin constantly, at varying rates which you determine. This means that you no longer have to give yourself injections.” 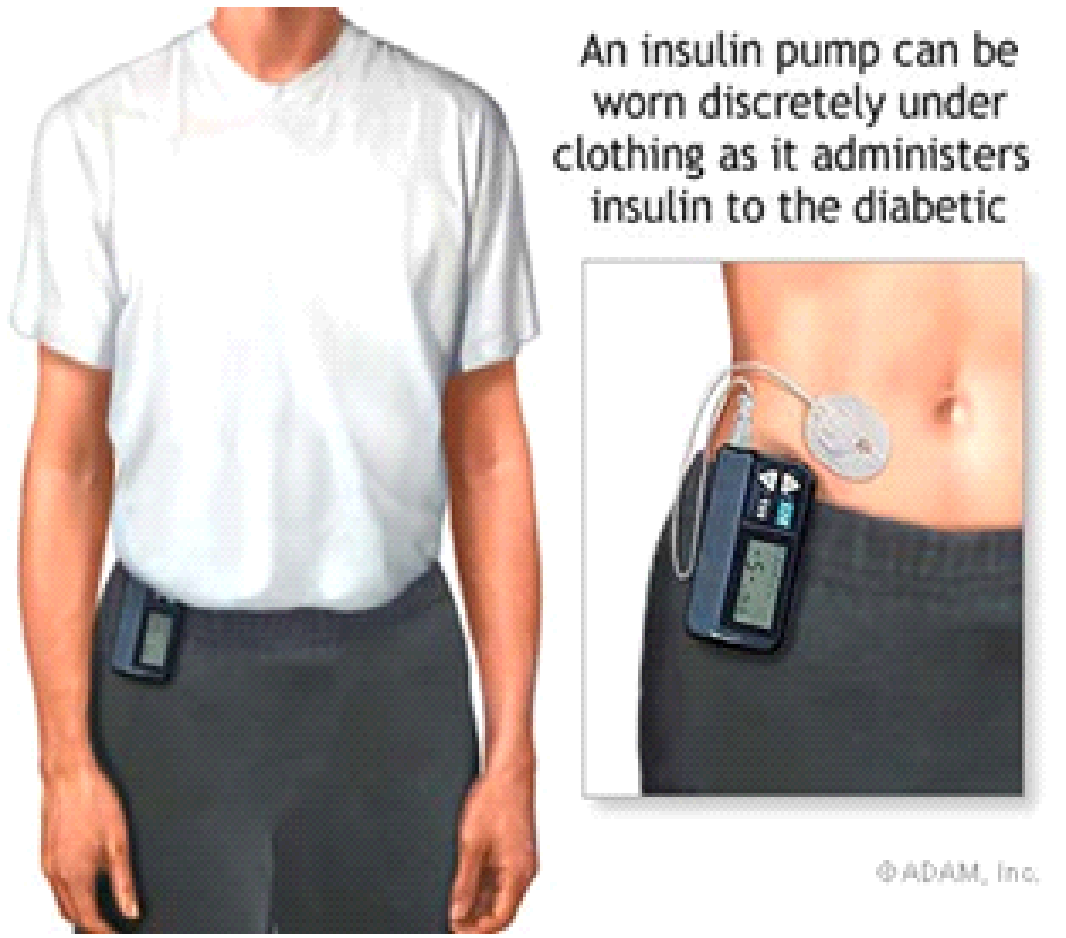 Insulin inhalers, like those used by asthmatics, have been proposed as a new method of getting insulin into the bloodstream with as little pain as possible.

"It's sort of a device that opens up to have a clear tube at the top," the FDA's[2] representative explains. "And the bottom, you put in an insulin packet that contains the powder, you cock the device almost the way you would a BB rifle, which forced air forces the insulin into an aerosol in this chamber that the patient then inhales from."

In theory, this is a great development: pain-free administration of insulin has been sought after for a while, and this may be the answer. However, there is a long way to go. It will be very difficult to inhale the correct dosage of insulin, and when you do there is no way of making sure it all gets to the bloodstream. Also, there is no long-term evidence that this works, and that other diseases, such as lung cancer, will not arise from inhaling insulin.

There seems to be articles on new, future treatments every day. So many, in fact, that sometimes we can even guess what their conclusion will be: that there is a long way to go to actually making it work in humans. 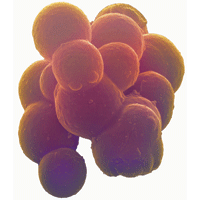 Stem cells have an exceptional potential to differentiate into many different cell types in the body, serving as a repair system. They can theoretically divide without any limit into other cells. When a stem cell divides, each new cell has the capability to either remain a stem cell or become another special type of cell, such as a nerve cell, a red blood cell or a heart muscle cell.

There are two different types of stem cells

A small study involving 23 patients with newly-diagnosed type 1 diabetes was carried out in brazil. Stem cell transplants work by ‘resetting’ the immune system so that the body stops attacking the pancreas. The researchers themselves say that this treatment can only be used when the condition is caught early enough (within six weeks of diagnosis), before the pancreas has been irreversibly damaged and before any complications from very high blood sugar have developed.

This research was conducted by Dr Carlos EB Couri and colleagues from the University of Sao Paulo, Brazil along with Dr Richard K Burt from the Division of Immunotherapy, Northwestern University Feinberg School of Medicine in Chicago.

The only thing holding back Stem Cell Research is the law. Following amendments to the Human Fertilisation and Embryology Act (1990) in 2000, based on the recommendations of the Donaldson Report, research is now taking place.

Pancreas transplantations are a scale further out. They involve transplanting a complete pancreas from one human to another.

The operation is most often done in combination with kidney transplant in a patient who have diabetes and kidney failure as a result of their diabetes.

[3]The risk is a makes me hesitate, and puts me off having the transplantation. 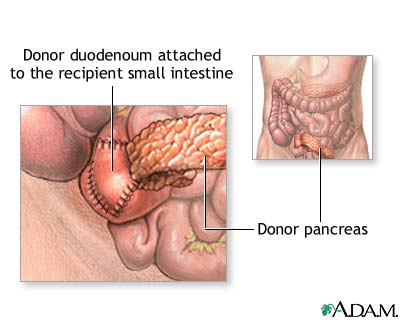 There are a number of ethical and moral concerns surrounding the use of therapeutic cloning using stem cells. From a moral standpoint regardless of whether the stem cell used for the creation of new organs are taken from cloned or real embryos, it is a process which cause the death of a human being which is seen to be unethical. The strongest opponents  to the use of embryonic stem cells are the Roman and catholic church; they believe that the creation and destruction of human embryos should not be in the hands of a human being, live and death is a gift from god. Other people believe that an embryo is not just a dot it is a living human being and should be give the right to develop into a mature human being. However scientist highly value stem cells because they hold a promise for curing diseases which we thought to be impossible. They also promise treatments for other diseases such as Huntington, Parkinson and Alzheimer which so far was thought to be impossible to cure.

“Stem cell research has the potential to provide better treatments and cures for many currently incurable medical conditions, including spinal cord injury, diabetes, Parkinson’s and many others. We are members of the Kansas Coalition for Lifesaving Cures because we believe patients should have access to future therapies and cures that improve and save the lives of hundreds of thousands of people in Kansas – and provide a model that may be needed in any other states where politicians try to impose

state-level bans on stem cell treatments that are permitted under federal law.”

Is there a cure for diabetes?

Scientists believe that by using stem cells they could provide a potential cure.

This bridge between what scientists are discovering and how close it is to be commercially available is even more apparent in the New Scientist, more specifically the article on discussed in page 6. It is easy to tell that the New Scientist is supposed to be read by at least medically interested readers, and to that end, gives more specifics. We learn that the “cure” lasted “several months”; meaning that it is not a total fix, and there is a lot more research to be done.

Doctor Mann, another doctor specialising in diabetes said “there is certainly a long way to go for the cure to be made commercially available, but when it does, it will solve every diabetic’s worries and problems. It is the perfect cure, better than any other treatment in the works”. I am sure I am not alone in saying that I cannot wait for that day!”