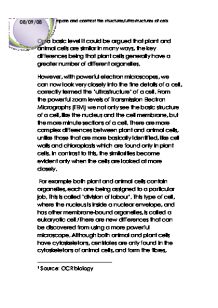 Compare and contrast the structures/ultrastructures of cells

On a basic level it could be argued that plant and animal cells are similar in many ways, the key differences being that plant cells generally have a greater number of different organelles. However, with powerful electron microscopes, we can now look very closely into the fine details of a cell, correctly termed the 'ultrastructure' of a cell. From the powerful zoom levels of Transmission Electron Micrographs (TEM) we not only see the basic structure of a cell, like the nucleus and the cell membrane, but the more minute sections of a cell. There are more complex differences between plant and animal cells, unlike those that are more basically identified, like cell walls and chloroplasts which are found only in plant cells. ...read more.

Although both animal and plant cells have cytoskeletons, centrioles are only found in the cytoskeletons of animal cells, and form the fibres, known as the spindle, which move chromosomes during nuclear division. Centrioles can be identified because they always come in pairs. The cytoskeleton refers to the network of protein fibres found within cells that gives structure and shape to the cell, and also moves organelles around inside cells. There are other fibres known as microtubules, made of a protein called tubulin. They may be used to move a microorganism through a liquid, or to waft a liquid past the cell. Ultimately, what the microtubule does comes down to the type of animal or plant cells, and the cells particular functions. ...read more.

Lysosomes are found in vesicles, which have the job of transporting materials around the cell. Vacuoles are found in the cytoplasm of most plant cells and some animal cells. When they are found in animal cells, they are represented as many smaller ones rather than one large one like in a plant cell.3 In conclusion, although the basic structures of plant and animal eukaryotic cells are similar, the in-depth analysis of the ultrastructure of plant and animal cells shows that there is much more to cells than what our first perceptions tell us, and that despite the structural similarities, they are a lot less alike than perhaps, a more common understanding of cells. 1 Source: OCR biology 2 Source: OCR biology 3 Source: Wikipedia ?? ?? ?? ?? Compare and contrast the structures/ultrastructures of cells ...read more.

***
A few good sections but generally rather superficial and lacking in specific detail.