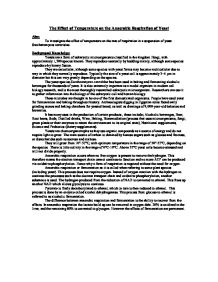 Effect of Anaerobic Respiration On Yeast

The Effect of Temperature on the Anaerobic Respiration of Yeast Aim: To investigate the effect of temperature on the rate of respiration in a suspension of yeast Saccharomyces cerevisiae. Background Knowledge: Yeasts are a form of eukaryotic microorganisms classified in the kingdom Fungi, with approximately 1,500 species known. They reproduce asexually by budding mainly, although some species reproduce by binary fission. They are unicellular, although some species with yeast forms may become multicellular due to way in which they normally reproduce. Typically the size of a yeast cell is approximately 3-4 �m in diameter but this can vary greatly depending on the species. The yeast species Saccharomyces cerevisiae has been used in baking and fermenting alcoholic beverages for thousands of years. It is also extremely important as a model organism in modern cell biology research, and is the most thoroughly researched eukaryotic microorganism. Researchers can use it to gather information into the biology of the eukaryotic cell and human biology. These microbes are thought to be one of the first domesticated organisms. People have used yeast for fermentation and baking throughout history. Archaeologists digging in Egyptian ruins found early grinding stones and baking chambers for yeasted bread, as well as drawings of 4,000-year-old bakeries and breweries. It has many uses in the production of certain products , these include; Alcoholic beverages, Beer, Root beers, Soda, Distilled drinks, Wine, Baking, Bioremediation (process that uses microorganisms, fungi, green plants or their enzymes to return the environment to its original state), Nutritional supplements, Science and Probiotics (dietary supplements). Yeasts are chemoorganotrophs as they use organic compounds as a source of energy and do not require light to grow. The main source of carbon is obtained by hexose sugars such as glucose and fructose, or disaccharides such as sucrose and maltose. They will grow from 10�-37�C, with optimum temperature in the range of 30�-37�C, depending on the species. ...read more.

Water in Burette If the water in the burette is not at the same level each time then inaccurate readings for displace water could be made Same person fills the burette each time so measurments taken from the same place Equipment: Equipment Use Precision Burette Measure the water displaced 0.1ml Water Reservoir Allow for burette to be suspended in water NA Yeast Suspension To be experimented on NA Water Baths To keep water temperature constant NA Thermometer Measure water temperature 1�C Timers Measure the time of the experiment 0.01seconds Conical Flask Hold yeast suspension NA Delivery Tube To allow carbon dioxide travel to the burette NA Bung Make the conical flask airtight NA Kettle Boil water NA Diagram: Method: 1. The equipment was set up as shown in the above diagram. 2. The kettle was switched on to allow the water to begin heating. 3. Just before boiling the water was then poured into the water baths and the temperature measured using a thermometer. 4. According to the temperature reading sufficient amounts of cold water were added to achieve the desired temperature. 5. The temperatures used in this preliminary experiment were Room Temperature (approximately 20 �C), 40�C and 50�C. 6. Once the required temperature was established a conical flask containing 100ml of yeast suspension was immersed in the water bath and the temperature was allowed to regulate for 10minutes, this was measured using a timer. 7. Once this 10minutes had elapsed the bung was put onto the conical flask and the tubing put up the burette to. 8. The respiring yeast was observed and measured for 10minutes further and the amount of carbon dioxide produced was recorded. 9. 3 repeats were done for each temperature. 10. Throughout the experiment certain amounts of cold and hot were added to the water bath to maintain a constant temperature. Conclusion of preliminary experiment: Overall I don't believe that the preliminary experiment was particularly successful. ...read more.

It may have been the case that in these two occasions, the pressure build up had not been significant to push respired gas through, which would give an anomalous reading. Limitations in the Procedure: Overall the procedures in this experiment seemed quite successful and accurate. There were however one or two limitations: The burette needed to be filled to exactly the right level each time. The only way this was done was by hand and eye. This meant that there is a possibility the water level at the beginning was different over repeats which could have an slight effect on the results. Accuracy of Observations: The same person was allocated to measure out all the liquids. This was done using a measuring cylinder to the nearest ml. The reason the same person was allocated to do this was so that the liquid was measured from the same point. Meaning each time there was exactly the same amount. This was the same for reading temperature. One person observed the readings and recorded them to create unbiased results. Temperature was measured to the nearest degree. The time of the experiments was recorded using a stopwatch. This can measure to the nearest 100th of a second. Also when liquids were measured out throughout the experiment, the cylinders were dried. This meant that no excess water could mix or effect the amount of substance measured. Main Source of Error: I believe that the main source of error within this experiment was fact that a pressure build up within the delivery tube was necessary for the carbon dioxide to filter into the burette. This meant that carbon dioxide was being released at irregular times. In all but two cases in the results however, the amount of carbon dioxide given off was relatively similar and repeats were close. However due to the irregular release of carbon dioxide, spotting anomalies in the raw data was impossible. This meant that the only recorded anomalies are those that stand out at the end of the experiment. ...read more.

*****
A detailed account of an investigation with a very good understanding of background theory.