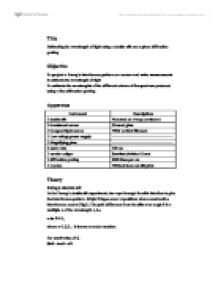 In the Young’s double slit experiment, two rays through the slits interfere to give the interference pattern. Bright fringes occur at positions where constructive interference occurs (Fig.1). The path difference from the slits at an angle θ is a multiple n of the wavelength λ, i.e.

For small value of θ,

and it was pointed towards

-There are errors from fringe separation reading using vernier caliper.

So the wavelength obtained is not accurate.

For the diffraction grating experiment,

-It is difficult to locate the exact fringe for that particular colour.

-There are errors from readings of x using a metre rule.

So the wavelength obtained is not accurate.

The advantage is that the angular separation of second order is larger than that of first order. It will have a smaller measurement percentage error.

The disadvantage is that the intensity of the second order is lower and the corresponding fringes for each colour are difficult to locate.

-The light source is very hot. Hold it with care.