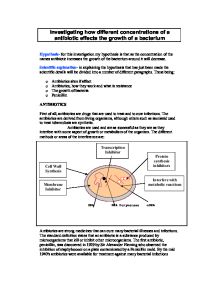 Investigating how different concentrations of a antibiotic effects the growth of a bacterium.

Investigating how different concentrations of a antibiotic effects the growth of a bacterium Hypothesis- for this investigation my hypothesis is that as the concentration of the names antibiotic increases the growth of the bacterium around it will decrease. Scientific explanation- in explaining the hypothesis that has just been made the scientific details will be divided into a number of different paragraphs. These being: o Antibiotics sites if affect o Antibiotics, how they work and what is resistance o The growth of bacteria o Penicillin ANTIBIOTICS First of all, antibiotics are drugs that are used to treat and to cure infections. The antibiotics are derived from living organisms, although others such as isoniazid used to treat tuberculosis are synthetic. Antibiotics are used and are as successful as they are as they interfere with some aspect of growth or metabolism of the organism. The different methods or areas of the interference are: DNA RNA Polymerase mRNA Antibiotics are strong medicines that can cure many bacterial illnesses and infections. The standard definition states that an antibiotic is a substance produced by microorganisms that kill or inhibit other microorganisms. The first antibiotic, penicillin, was discovered in 1929 by Sir Alexander Fleming who observed the inhibition of staphylococci on a plate contaminated by a Penicillin mold. By the mid 1940's antibiotics were available for treatment against many bacterial infections including strep throat, pneumonia, skin infections, wound infections, scarlet fever, toxic shock syndrome and other bacterial infections. Facts concerning antibiotics are: o Antibiotics are only effective in the treatment of bacterial infections. They have absolutely zero impact on viral infections. o Antibiotics work by either killing bacteria or by inhibiting growth. o Antibiotics don't have any impact on viruses such as colds, flu, bronchitis, or other viral infections. Only your doctor can determine if you have a viral or bacterial infection. o Each time we take antibiotics, sensitive bacteria are killed, but resistant ones may be left to grow and multiply. ...read more.

Temperature Independent Yes The temperature in each will remain at room temperature, and will aim to keep in same location to reduce difference in temperature. Number of bacteria Independent Yes In the controlling of the bacteria the method that will be used with be the same to keep this the same so that all samples are similar, although small difference may occur which are very difficult change. Type of antibiotic Independent Yes To control the type of antibiotic used the same antibiotic, will be used in each agar and bacterium sample. Time Independent Yes In each of the dishes containing the agar, bacterium and agar they will all be left for the same amount of time. For example 72 hours. PH Independent Yes In each of the different samples to the pH level of substances contained will be made sure that they are all the same. Growth of Bacteria Dependent No Risk Assessment/Safety- When implementing the practical there are a number of points or issues that would need to be taken into consideration, which are part of the Risk and Safety Assessment. In assessing the different risks, I will note them and then begin assessment and the preventions that can be taken. The different risks include: o Aseptic technique o Ethanol o Risk of person o High temperature Aseptic technique- Aseptic means "without micro organisms." Aseptic technique refers to practices that help reduce the risk of post procedure infections in clients by decreasing the likelihood that microorganisms will enter the body during clinical procedures. Some of these practices are also designed to reduce service providers' risk of exposure to potentially infectious blood and tissue during clinical procedures. So when assessing the risk of this during the practical it can be seen as a major risk if the right precautions or preventions are taken. Different examples of the techniques that could be use include: * Remove or kill microorganisms from hands and objects. ...read more.

But throughout the experiment this may have been forgotten or not carried this out correctly, affecting different parts of the practical such as the spreading of the agar plates. The effect of this may have been the poor spreading of the bacteria, addition of foreign bodies. o Disc diameter- as the production of the discs was simple done using a hole punch there was not much guarantee that these would have been the same in diameter, this in turn may have and an effect on the absorption of antibiotic solution, although small differences some results may have differed. o Serial dilution- for the preparation of the different concentrations this involved the addition of water etc. Problems may have occurred in wrong measurement of water and antibiotic solutions, test tubes filled etc, damaged all results gathered o Pouring of agar- as this was to be a very important but this could go wrong quite simply as during this it may have been breathed, the addition of foreign bodies etc. o Spreading of bacteria- this in the practical was the area where most error may have occurred. The different errors that may have occurred may have been the poor spreading of bacteria across the agar nutrients, sterilisation, and cutting of agar. o Saturation of discs- during the practical when the different solutions had been made, they were then poured into the different solutions, where the discs where shortly added. The problem with this method is that there is no way to ensure that they have been covered with the solution and for the same amount of time. If there were the chance to repeat to practical there would be certain area that would need to be improved. The different areas include: o The different concentrations that were selected, it would be better to see a larger range. o Better method of production for discs o Spreading technique- longer time may be better so that time was not rushed. Possibly more practice at the technique If the investigation was to be repeated a new method that could be used may be ...read more.