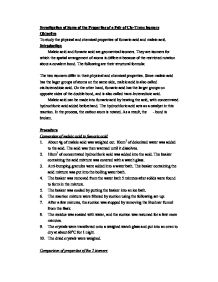 Investigation of Some of the Properties of a Pair of Cis-Trans Isomers Objective To study the physical and chemical properties of fumaric acid and maleic acid. Introduction Maleic acid and fumaric acid are geometrical isomers. They are isomers for which the spatial arrangement of atoms is different because of the restricted rotation about a covalent bond. The following are their structural formula: The two isomers differ in their physical and chemical properties. Since maleic acid has the lager groups of atoms on the same side, maleic acid is also called cis-butenedioic acid. On the other hand, fumaric acid has the larger groups on opposite sides of the double bond, and is also called trans-butenedioic acid. Maleic acid can be made into fumaric acid by heating the acid, with concentrated hydrochloric acid added beforehand. The hydrochloric acid acts as a catalyst in this reaction. In the process, the carbon atom is rotated. As a result, the - bond is broken. Procedure Conversion of maleic acid to fumaric acid 1. About 4g of maleic acid was weighed out. 10cm3 of deionized water was added to the acid. The acid was then warmed until it dissolves. 2. 10cm3 of concentrated hydrochloric acid was added into the acid. The beaker containing the acid mixture was covered with a watch glass. 3. Anti-bumping granules were added into a water bath. ...read more.

Reaction with bromine water Maleic acid: the solution turns pale yellow. Fumaric acid: the solution turns pale yellow. 4. Melting points of the two acids Maleic acid: 150oC ~ 156oC Fumaric acid: 287oC ~ 300oC Conclusion Maleic acid displays acid properties to a higher extent. Maleic acid is more soluble in water. Both acids decolorize bromine water. The melting point of maleic acid is lower than fumaric acid. Discussion 1. The reaction to convert maleic acid to fumaric acid is assumed to have gone to completion after boiling in a water bath for 5 minutes. However, some maleic or hydrochloric acid still remains in the reaction mixture after the reaction. As a result, maleic acid would be found on the surface of the residue of the mixture even after the filtration. If the contaminated residue is allowed to dry up in the oven, the weight of fumaric acid weighed in the balance would not reflect its actual value. 2. After having filtration for a period of time, the fumaric crystals could be washed with distilled water. In this way, the amount of impurities in the fumaric acid crystals can be reduced. 3. In this experiment, concentrated hydrochloric acid was used as a catalyst. Concentrated hydrochloric acid is extremely hazardous. It gives off a white fume when its lid is opened. It gives a bad and toxic smell of hydrogen chloride. ...read more.

This creates a conventional current. So, the oil was heated more efficiently. 10. The trans-butenedioic acid has a higher stability than cis-butenedioic acid. This is because in the trans-butenedioic acid, the bulkier groups are further apart. So, this acid has a lower intrinsic energy and thus a higher stability. 11. Maleic acid exhibits a higher acidic property than fumaric acid. This is because maleic acid contains intramolecular hydrogen bonds. This draw electron density away from the other O-H bond. This weakens the bond and makes the release of the first hydroxide ion much more ready. Fumaric acid does not have intramolecular hydrogen bonds. So, the first hydroxide ion is not easily released as maleic acid does. 12. However, the second acid dissociation constant of maleic acid is lower than that of fumaric acid. That is, the second hydroxide molecule does not leave the maleic acid easily. This is because the maleic acid has extra stability after the first hydroxide ion is lost. 13. As the two carboxyl groups of maleic acid are put at the same side, it can form anhydride when heated to 150oC. Fumaric acid does not form anhydride. But when it is heated to 250oC, its -bond breaks and maleic acid is formed, which turns to anhydride at this temperature. 14. Due to this reason, the melting point of the two acids can only be determined once. If the test tube was heated to a temperature higher than the melting point, another substance is formed and we would fail in determining the correct melting point. ?? ?? ?? ?? ...read more.