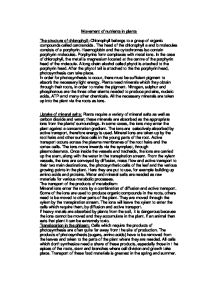 Movement of Nutrients in Plants

Movement of nutrients in plants

In order for photosynthesis to occur, there must be sufficient pigment to absorb the necessary light energy. Plants need minerals which they obtain through their roots, in order to make the pigment. Nitrogen, sulphur and phosphorous are the three other elemts needed to produce proteins, nucleic acids, ATP amd many other chemicals. All the necessary minerals are taken up into the plant via the roots as ions.

Uptake of mineral salts: Plants require a variety of mineral salts as well as carbon dioxide and water; these minerals are absorbed as the appropriate ions from the plants’ surroundings. In some cases, the ions may enter the plant against a concentration gradient. The ions are selectively absorbed by active transport, therefore energy is used. Mineral ions are taken up by the root hairs and other surface cells in the young parts of the root. Active transport occurs across the plasma membranes of the root hairs and the cortex cells. The ions move inwards via the symplast, through plasmodesmata. Once inside the vessels and tracheids, the ions are carried up the stem, along with the water in the transpiration stream. From the xylem vessels, the ions are conveyed by diffusion, mass flow and active transport to their two main destinations, the photosynthetic cells of the leaf and the various growing points in the plant. Here they are put to use, for example building up amino acids and proteins. Water and mineral salts are needed as raw materials for various metabolic processes.

The transport of the products of metabolism:

If heavy metals are absorbed by plants from the soil, it is dangerous because the ions cannot be moved and they accumulate in the plant. If an animal then eats that plant it can be extremely toxic.

Translocation in the phloem: Cells which require the products of photosynthesis are often quite far away from the site of production. The products of photosynthesis (sugars, amino acids) have to be removed from the leaves and taken to the parts of the plant where they are needed. All cells which don’t synthesize need a share of these products, especially those in the apices of the roots, stem and branches where cell division and growth take place. Transport of these food materials is greatest in the spring and summer. Later in the year, many plants form perennating organs (tubers, bulbs, corms) to which food materials are transported for storage until the following season. When the next season arrives, the stored food is transported in soluble form to the growing points of the new plant. The translocation process is accomplished by the phloem; the material is moved mainly by mass flow (pressure flow). If phloem tissue is analysed it seems to be composed of three types of cell: sieve cells, companion cells and parenchyma cells. Sieve cells have no nuclei and are aligned end to end to form long sieve tubes, i.e. the channels for translocation. The end of each sieve cell is perforated (sieve plate) and the perforations are perfectly matched to allow the passage of maerials. Cytoplasmatic filaments extend from one sieve cell to the next through the pores on the sieve plate. The cytoplasm contains no orgnelles apart from adjacent to the cellulose wall. Next to each sieve cell, are one or more companion cells which possess a nucleus, dense endoplasmatic reticulum, ribosomes and mitochondria. Plasmodesmata connect each sieve cell to its adjacent companion cell.

Extension: some soils are deficient in mineral salts and plants living in them have especial means of obtaining nitrogen and other essential elements. The roots of many plants which live in humus soil possess a mycorrhiza, an association between their roots and a fungus. The fungus consists of a network of fungal threads (hyphae) which can be located on te surface of the root or inside. The fungus breaks down the humus into soluble nutrients some of which are absorbed and utilised by the host plant. Most of these plants only obtain phosphorous and nitrogen compounds from the fungus. They can photosynthesise normally and therefore receive their own carbohydrates, some of which are absorbed by the fungus. This is an example of mutualism. Most plants with mycorrhizal roots can photosynthesise but some lack chlorophyll and cannot do so. These plants depend on their mycorrhiza fro carbohydrates as well as nitrogen compounds.

Some leguminous plants such as peas, beans and clover have nitrogen-fixing bacteria in their roots. Plants living in nitrogen deficient soil often resort to feeding on animals as a means of obtaining nitrogen. These carnivorous plants trap small animals, mainly insects in a modified leaf where they are digested, the products of digestion are absorbed into the leaf and transported to wherever they are needed.

The response to the question is well done for the most part. The candidate should proof-read the coursework to avoid careless mistakes, and include both an introduction and conclusion. To improve the essay they should also try to use better ...

The response to the question is well done for the most part. The candidate should proof-read the coursework to avoid careless mistakes, and include both an introduction and conclusion. To improve the essay they should also try to use better scientific terms and include concepts of science that imply higher levels of thinking. Text is written in a clear and concise format.

No introduction which would increase the candidates mark. Not sure how chlorophyll relates to the movement of nutrients in plants, and any link between them is not very clearly explained, apart from trying to put the need for nutrients in plants into context which is also not well explained. Level of analysis of plant uptake explained in the main body of text is to a good standard, although to get a higher grade the candidate could introduce concepts beyond the A level syllabus and perhaps look into new research papers published on the topic. No conclusion is provided which could improve the essay further. Perhaps the pros and cons of the methods of plant transport and the efficiency could be analysed.

Some grammar mistakes, such as missing the 's' off the end of some words. Some words are also spelt wrong, could be avoided by simple proofreading. Punctuation is fine, but spelling and grammar needs addressing.