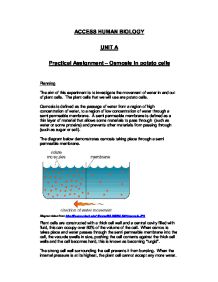 ACCESS HUMAN BIOLOGY UNIT A Practical Assignment - Osmosis in potato cells Planning The aim of this experiment is to investigate the movement of water in and out of plant cells. The plant cells that we will use are potato cells. Osmosis is defined as the passage of water from a region of high concentration of water, to a region of low concentration of water through a semi permeable membrane. A semi permeable membrane is defined as a thin layer of material that allows some materials to pass through (such as water or some proteins) and prevents other materials from passing through (such as sugar or salt). The diagram below demonstrates osmosis taking place through a semi permeable membrane. Diagram taken from http://fig.cox.miami.edu/~lfarmer/BIL265/BIL2001/osmosis.JPG Plant cells are constructed with a thick cell wall and a central cavity filled with fluid, this can occupy over 80% of the volume of the cell. When osmosis takes place and water passes through the semi permeable membrane into the cell, the vacuole swells in size, pushing the cell contents against the thick cell walls and the cell becomes hard, this is known as becoming "turgid". The strong cell wall surrounding the cell prevents it from bursting. When the internal pressure is at its highest, the plant cell cannot accept any more water. This works against osmosis as it prevents further intake of water. This feature is important to plant cells as it is what causes plants to rise up towards the sunlight. When osmosis occurs and plant cells lose water, they become soft and are known as being "flaccid". The contents of the cell in this case shrink and pull away from the cell wall. In this state they are said to have "plasmolysed". When no osmosis occurs because the solution and the cell contain the same concentration of water, this is known as "Incipient plasmolysis". This occurs when plants are not watered (such as when you go away on holiday) ...read more.

Concentrations of solutions: * One solution was 100% pure distilled water and therefore 0% sucrose. * The second solution was 5% sucrose and 95% distilled water. * The third solution was 10% sucrose and 90% distilled water. * The fourth solution was 15% sucrose and 85% distilled water. * The fifth solution was 20% sucrose and 80% distilled water. We each took five potato chips to place one chip in each solution. When the experiment was completed, we shared our results with five others, thus obtaining a total of five results for each solution. Method: * We collected five test tubes and placed them in a test tube rack. * We labelled each test tube with the intended contents. * We made collected the solutions from each plastic container and measured 20ml of each solution using a measuring test tube and added to each test tube. * We collected a potato and it was cut into five equal chips for us using a scalpel, ruler and white tile. * We measured the length of each chip and made a note of the mass of each chip. * We placed the first chip in the first solution and noted the time of the start of the experiment. We waited one minute before placing the second chip in the second solution. We continued at one minute intervals until all chips were in the solutions. * After one hour had completed, we removed the first chip, dried it once pressing down firmly on a paper towel, measured its length with a ruler and took a note of its mass using a balance. One minute later we removed the second chip and did the same. We continued at one minute intervals until all chips had been removed and measured. * We then recorded our results in a table. * The equipment was then safely cleared away and we shared our results with five others until we had five sets of data. ...read more.

I feel that to improve the fairness of test, a potato chipper machine could be used or a crudit�s tool could be used to ensure the same thickness of chip were cut, they could then be cut to an equal length, lining them up to a square edge rather than being cut by hand measuring by eye as they were for our experiment. An additional point was the method used to time the experiment, we had to use a wall clock rather than a stop clock and so exact time measurements could not be made as it was difficult to see exactly when one minute had passed. To improve upon this point, I would use a stop clock next time. Although a varied range of sucrose solutions was used, I would like to use a wider range of solutions in order to determine exactly when plasmolysis occurred. I would also like to leave the chips in the solution for a longer time period in order to discover the saturation point of the potato cells. As the test tubes were open to the air, evaporation could have occurred and some solution could have been lost, to prevent this, bungs could be used to stop the test tubes. The temperature was not kept constant throughout the experiment, although I had planned to do so, this could be improved by possibly using a water bath to keep the temperatures the same throughout the duration of the experiment. A more consistent method of drying the chips could be used, rather than using paper towels and guessing that the same pressure was exerted on all chips to dry them. Different types of potato could be used to compare the results between them, or other varieties of vegetables or fruit. To conclude, the experiment was accurate and fair, however many changes and improvements could be made, as listed above. The experiment demonstrated osmosis had taken place, but with the improvements listed above, a more accurate set of results could be obtained. ...read more.