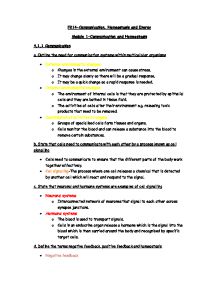 F214-Communication, Homeostasis and Energy Module 1-Communication and Homeostasis 4.1.1 Communication a. Outline the need for communication systems within multicellular organisms * External environmental changes o Changes in the external environment can cause stress. o It may change slowly so there will be a gradual response. o It may be a quick change so a rapid response is needed. * Internal environmental changes o The environment of internal cells is that they are protected by epithelial cells and they are bathed in tissue fluid. o The activities of cells alter their environment e.g. releasing toxic products that need to be removed. * Coordination of activities of organs o Groups of specialised cells form tissues and organs. o Cells monitor the blood and can release a substance into the blood to remove certain substances. b. State that cells need to communicate with each other by a process known as cell signalling * Cells need to communicate to ensure that the different parts of the body work together effectively. * Cell signalling-The process where one cell releases a chemical that is detected by another cell which will react and respond to the signal. c. State that neuronal and hormone systems are examples of cell signalling * Neuronal systems o Interconnected network of neurones that signal to each other across synapse junctions. * Hormonal systems o The blood is used to transport signals. o Cells in an endocrine organ release a hormone which is the signal into the blood which is then carried around the body and recognised by specific target cells. d. Define the terms negative feedback, positive feedback and homeostasis * Negative feedback o Process that brings about a reversal of any change in conditions. o Maintains and optimum steady state due to the return of the internal environment to its original set of conditions. * Positive feedback o Process that increases the change detected by the receptors. ...read more.

The membrane depolarises as it becomes less negative the outside and reaches the threshold of -50mV. Voltage-gated sodium ion channels open and sodium ions flood in making the inside of the cell positively charged compared to the outside. The potential difference reaches +40mV. 3. Sodium ion channels close and potassium channels open. Potassium ions diffuse out bringing the potential difference back to negative which is called repolarisation. 4. The cell becomes hyperpolarised. 5. The original potential difference is restored and the cell is back to its resting potential. g. Outline the significance of impulse transmission * A signal from a light receptor will only inform that there is light but not the intensity. * When a stimulus is at a higher intensity it will produce more generator potentials therefore there will be more frequent actions potentials so more vesicles are released at synapses. * The brain can determine the intensity of the stimulus due to the frequency of signal arriving. * More signals=a more intense stimulus. h. Compare and contrast the structure and function of myelinated and non-myelinated neurones Myelinated neurones Non-myelinated neurones * Fast speed of conduction- 100-200ms-1. * Has nodes of Ranvier. * Has a myelin sheath with each neurone wrapped in several Schwann cells. * In the peripheral nervous system carrying impulses from sensory receptors to the Central Nervous System or from the Central Nervous System to the effector. * Action potential moves via saltation. * Carry signals over a longer distance. * Slow speed of conduction- 0.5-10ms-1. * Does not have nodes of Ranvier. * Does not have a myelin sheath but several neurones may be surrounded by one Schwann cell. * In the Central Nervous System and in the nerves controlling the organs with no conscious control. * Action potential moves in a wave. * Carry signals over a short distance. i. Describe the structure of a cholinergic synapse Cholinergic synapse=A synapse that uses acetylcholine as the neurotransmitter. ...read more.

* Certain factors may make the onset earlier: obesity, a diet high in sugars, being of Asian or Afro-Caribbean origin and family history. h. Discuss the use of insulin produced by genetically modified bacteria and the potential use of stem cells to treat diabetes mellitus * Advantages of using genetically modified bacteria o Exact copy of human insulin so faster acting and more efficient than using animals. o Less chance of developing intolerance. o Less chance of rejection. o Lower risk of infection. o Cheaper to manufacture. o Less likely to cause medical objection. * Using stem cells. o They are not differentiated so can be any cell. o Most common sources are bone marrow and the placenta. o Similar precursor cells have been found in the pancreas of adult mice. It is thought that if similar ones are found in the human pancreas then it could be used to produce new � cells to treat type 1 diabetes. i. Outline the hormonal and nervous mechanisms involved in the control of heart rate in humans * Movement of the limbs are detected by stretch receptors which send impulses to the cardiovascular centre informing it that more oxygen may be needed increasing the heart rate. * During exercise more carbon dioxide tends to be produced some of which will react with water in the blood plasma reducing the pH. This change is detected by chemoreceptors in the cartoid arteries, the aorta and the brain. These send impulses to the cardiovascular centre increasing the heart rate. * When we stop exercise it leads to a decrease in carbon dioxide levels, decreasing the activity in the accelerating pathway leading to the heart rate decreasing. * When adrenaline is released in response to stress, shock, anticipation and excitement, the heart rate increases to prepare the body for activity. * Blood pressure is monitored by stretch receptors in the walls of the cartoid sinus. If it gets too high it send signals to the cardiovascular centre leading to the reduction in heart rate. ...read more.